In 2009, the Small Grants Programme entered a partnership with Australian Government Overseas Aid Program, now assimilated under the Department of Foreign Affairs and Trade (DFAT) of the Australian Government to start a Community-Based Adaptation (CBA) programme with the objective to improve the adaptive capacity of communities and to reduce their vulnerability to the impacts of climate change. The programme has been implemented in two phases: one in the Mekong and Asia Pacific region (MAP CBA) and the other in Small Island Developing States (SIDS CBA) with a total of 42 countries benefitting from the programme in both phases.

The goals of the CBA programme are three-fold:

The CBA country programme strategies (CCPS) incorporate the national priorities as stated in the National Adaptation Plan for Action submitted to the United Nations Framework Convention on Climate Change while simultaneously building on local knowledge. Thus, the projects address the challenges of these communities based on a holistic, yet site-specific approach. The programme’s participatory and social inclusion approaches ensure that every community member has a role and a voice regardless of age, gender and physical/mental abilities. Moreover, the CBA programme uses a range of methodologies to allow the country teams to choose the appropriate tool for their target audience such as the Vulnerability Reduction Assessment (VRA), Climate Vulnerability and Capacity Analysis (CVCA) and Community-Based Risk Screening Tool – Adaptation and Livelihoods (CRiSTAL). 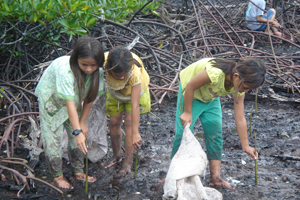 The projects implemented under the MAP CBA Project include the following initiatives: 1) identification of native crops to reduce the impacts of sea level rise, saltwater intrusion, decreased rainfall, floods and droughts; 2) development of techniques for sustainable land management and water security according to terrain and season; 3) testing of identified resilient crop species to address saltwater intrusion in rice fields and soil degradation in other agricultural land plots; 4) promotion of rainwater harvesting and the use of solar-powered water pumping, purification and distribution schemes for water security amidst climate change-driven droughts; 5) diversification of livelihood options with a view of reducing the risks to productive activities from climate change impacts and its variability; 6) resource-mapping and the collection and documentation of CBA innovations; and 7) knowledge-sharing of CBA best practices and lessons learned for up-scaling and replication at the local, national and global levels.

MAP CBA progress has followed consistent positive trends in the Mekong, Asia and Pacific regions. In the four Mekong-Asian countries, the programme has matured to a stage where 100% of funds have been allocated to a total of 7 planning grants and 27 projects. All 7 planning grants have been successfully completed. Out of the 27 projects, 24 have been completed and the remaining 3 projects are set to be completed in the first half of 2015, including a knowledge management project in Sri Lanka to document case studies from its 12 CBA projects.

Successful results from the MAP CBA programme include the up-scaling of CBA practices to form the Cambodia Community-Based Adaptation Plan (CCBAP) that is funded by the Swedish International Development Cooperation Agency (SIDA); and the integration of CBA approaches in the into the Cambodia Climate Change Strategic Plan 2014-2023, the first-ever strategic paper to fight climate change in Cambodia in the next 10 years. One of the guiding principles of the strategic framework is to “Use a combination of science-based, ecosystem-based and community-based approaches”. Similarly, under the Plan’s Strategic Objective 2: Reduce sectoral, regional, gender vulnerability and health risks to climate change impacts, one of the strategies is to “Promote community-based adaptation approaches and strengthen partnerships between development partners, civil society, the private sector and the Government”.

The 16 small island developing states in the Pacific have been integrated into the SIDS CBA Project.

An increased collaboration between the Australian government and UNDP on the topic of CBA was finalized in June 2011 through a wider SGP grant-making programme focusing on the particular needs and vulnerabilities of Small Island Developing States (SIDS) globally. This project builds on the success of the MAP CBA projects and expands its reach to 38 SIDS globally (including 16 SIDS already part of MAP CBA). With an additional AUD $6 million from DFAT, the SIDS CBA project is implemented from 2011 to 2016 in the following regions and countries: 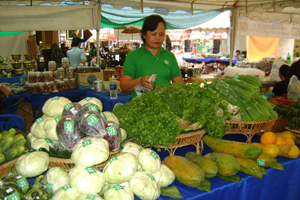 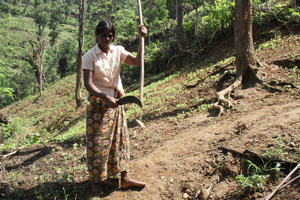 The projects implemented under the SIDS CBA Project include the following initiatives: 1) use of sustainable land management (SLM) practices; 2) introduction of water resource management schemes such as rainwater harvesting, gravity-fed water schemes and establishment of water catchments and storages; 3) application of resilient native species for ecosystem conservation, restoration and reforestation (e.g. mangrove, coasts, flatlands and mountains); and just like the MAP CBA projects: 4) diversification of livelihood options with a view of reducing the risks to productive activities from climate change impacts and its variability; 5) resource-mapping and the collection and documentation of CBA innovations; and 6) knowledge-sharing of CBA best practices and lessons learned for up-scaling and replication at the local, national and global levels.

The first year the SIDS CBA project focused solely on training the CBA teams and establishing CCPS. 30 out of the 38 countries have an approved CBA country programme strategy with the remaining 7 countries set to finalize their CCPS in early 2015. Sao Tome Principe is currently a non-active SGP country and is planned to commence in SGP’s 6th Operational Period (OP6). A total of 30 planning grants and 87 projects have been funded in 27 out of the 38 countries, of which 14% was committed in 2012, 32% committed in 2013 and 54% committed in 2014. Out of the 87 projects, 47 projects (53%) are under implementation, 10 projects (12%) have been completed and the remaining 30 projects (35%) were approved in late 2014 and will start implementation in early 2015.

Successful results from the SIDS CBA programme include the 2013 Island Bright Spot Award given to a project grantee in Mauritius, the Grand-Sable Women Planters Farmers Entrepreneurs Association, for its CBA innovative solutions in advancing conservation and sustainable development in its island communities. Ms. Geraldine Artistide, the President of the NGO, attended UN’s Third International Conference on Small Island Developing States (UN SIDS) held in Samoa on September 2014, to accept the award and showcase the CBA innovations in seaweed cultivation. Knowledge-sharing of the CBA best practices with national stakeholders have mobilized additional funds from the Adaptation Fund with close monitoring from the Ministry of Environment and Sustainable Development, and are now in the position to be up-scaled and replicated.

In the Pacific, the CBA project lessons and approaches continue to be replicated. In Vanuatu, the World Bank has funded other initiatives for CBA on fresh water security. In Fiji, the grantee, LajeRotuma, has replicated CBA innovations on natural resource management to other projects they support in five outer island communities. From the same project, the empowered community members of Rotuma continue to facilitate knowledge-sharing amongst community groups located in two outer islands to enhance replication of CBA approaches and best practices. In the Caribbean, the sustainable CBA practices in Jamaica continue to influence national development planning processes. In 2013, the UN Country Team replicated a CBA rainwater harvesting project and developed a joint initiative with the Ministry of Water, Land, Environment and Climate Change on developing a video that addresses water management issues at the local community level. The NC in Jamaica also has been invited to participate in the national development planning processes, including the preparations for the Third National Communication, the formulation of a Climate Change Policy and the establishment of a Climate Change Department. In the 2014 national drought emergency, the SGP Jamaica country team was invited to several government meetings to share their sustainable practices, in a joint effort to address the unexpected drought, especially within the most vulnerable communities. The CBA projects’ grantees have also been invited by the Jamaican government to participate in various stakeholder consultations for the planning of the new Climate Change Policy to ensure that community concerns on water issues are addressed in an integrated manner.

Guidance Note on How to Plan and Mainstream Community-Based Adaptation at the Local, Sub-National and National Levels