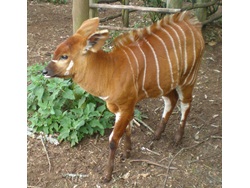 The Mountain Bongo is one of the world's most unique and spectacular antelope. It is the largest forest antelope in the world, growing up to 400 kg, and has a reddish-brown coat with eight to 14 vertical white stripes. It is endemic to only Mt. Kenya, parts of the Eburru Forest and Aberdare Ranges in Kenya. Because of its beauty and relative scarcity, the Mountain Bongo was long viewed as a prized trophy by hunters, especially in the Mt. Kenya region. Combined with the rapid loss of its habitat due to human settlement, hunting of these rare antelope for sport and food caused a sharp decline in their numbers beginning in the mid-1900's.

In the 1960's, a group of wildlife conservationists based at the Mt. Kenya Game Ranch, working in partnership with the Kenya Wildlife Department and scientists from the United States, planned and organized the capture of a small group of Mountain Bongos. These Bongos were sent to zoos in America to ensure the survival of the species in the event it were to go extinct on Mt. Kenya. Over the next 30 years, the population of Mountain Bongos continued to decline until they were believed to have gone extinct on Mt. Kenya in 1995. With the realization that the Mountain Bongo had disappeared on Mt. Kenya, arrangements were made to repatriate a small herd of Mountain Bongos from the United States to Kenya for breeding and eventual release back into the Mt. Kenya Forest. The first group of Bongos arrived on Kenyan soil in January 2004, signaling a major achievement in wildlife conservation. However, before the Mountain Bongos could be successfully released to the wild and survive in the Mt. Kenya Forest, the communities surrounding Mt. Kenya would have to recognize the importance of the Bongo and learn how to conserve and protect its habitat. 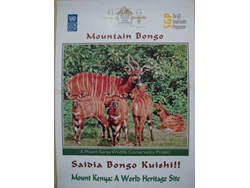 During the 1990's and early 2000's a surge in public environmental consciousness occurred globally and in Kenya. The culture of environmental exploitation and destruction that had resulted in extensive illegal logging and growing of marijuana in the Mt. Kenya forest had decreased, as evidenced by aerial surveys conducted in 1999 and 2002 in a partnership between Kenya Wildlife Service and UNEP. However changes in the attitudes of the local communities needed to be achieved prior to the release of the Mountain Bongo to the Mt. Kenya Forest. With funding from the United Nations Foundation through the Mt. Kenya COMPACT Initiative, also supported by the GEF Small Grants Programme, the William Holden Wildlife Foundation and Education Center developed and implemented a comprehensive Bongo conservation and awareness campaign focused on the protection of the Mountain Bongo and its habitat before and after its release to the wild. The outreach program also provided an opportunity to impress upon the communities the importance and value of Mt. Kenya to biodiversity, tourism, employment, water availability, and as a World Heritage Site. 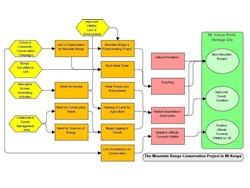 The project, which began in 2004, has already reached over 50,000 school children and adults through lectures and video presentations at the Education Center and at schools all around Mt. Kenya. A wide variety of publications, such as posters and booklets, have been distributed and signboards erected in areas where the Bongo is expected to settle. By fostering a sense of appreciation, affection and respect for the Bongo, communities living near or sharing the Bongo's habitat will help to monitor and protect the Bongo, thus ensuring the long-term survival and repopulation of the Mountain Bongo on Mt. Kenya after its release to the wild. Toll-free hotline calling numbers have also been introduced to ease information flow.

Since their arrival in January of 2004, the number of Bongos has more than tripled, from 18 to 62. In the last few years, a new generation of Mountain Bongos has been raised in the enclosure and exposed to wilderness conditions, readying them for release to the Mt. Kenya Forest. With the successful completion of a substantial portion of the community conservation campaign, the project collaborators collectively decided that the time was right for the release of the first group of Mountain Bongos into the Mt. Kenya Forest.

Before the end of 2009, the first group of ten Mountain Bongos will be released to their ancestral home in the Mt. Kenya Forest. The Kenya Wildlife Service has formed a Bongo Surveillance Team which will monitor the Bongos and their habitat after the Bongos are released into the forest. The Surveillance Team will ensure that threats to the Bongos and their habitat, such as poaching and illegal logging, are minimized as the Bongos adapt to their home in the Mt. Kenya Forest. Hikers and members of the communities living near the Mt. Kenya Forest who travel into the forest will also be relied upon to report any illegal activities occurring within the forest as well as sightings of the Mountain Bongos. Over the next ten years, additional groups of ten Bongos will be released annually to help increase the population of the herd on Mt. Kenya. Through these additional releases and natural reproduction in the wild, it is hoped that the population will reach at least 150 antelope by the end of a decade. See the Miradi project conceptual model below.