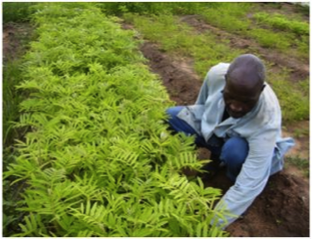 The use of agro-chemicals has been on the rise in tobacco farming in Zimbabwe. As an important cash crop farmed by communal farmers, tobacco farming, and the associated chemicals used, have had substantial repercussions for the environment, food security as well as human health. Spearheaded by the Organic Network Forum, the GEF SGP funded project Organic Farming Practices for the Elimination of Persistent Organic Pollutants and Biodiversity Conservation in Selected Rural and Urban Communities in Zimbabwe, was funded under the GEF Persistent Organic Pollutants (POPs) focal area, with a cross cutting focus on Biodiversity. The project received US$ 49,956 in funding from the GEF SGP, implemented by UNDP, while co-financing amounting to US$ 27,179 was raised through community contributions. The project was implemented in two phases between 2006 and 2011, involving approximately 500 households in the villages of Chitsva, Cheneka, Tandi Central and Chirimutsitu in the Manicaland region, in the Makoni District.

This project initiated by the Organic Network Forum, sought to eliminate the use of dichlorodiphenyl trichloroethane (DDT) in the project area in order to rehabilitate the environment and to improve the quality of life of the local communities. The project promoted chemically clean food production, minimizing inputs of chemical fertilizers, agro chemicals and associated by-products. The project also promoted alternatives to tobacco farming by encouraging diversified income generation activities, including apiculture, aquaculture as well as organic mushroom production. 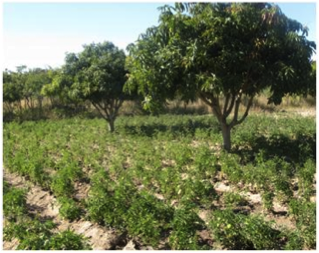 During the course of the two project phases, 524 farmers were trained in organic farming. 450 hectares of land are now under extensive organic farming and more than two thirds of the farmers are ready for organic certification and accreditation according to IFOAM and ISO65 Codes. Through the project, the farmers were able to establish the Makoni Organic Farmers Association (MOFA) to strengthen their capacities, diversify their products and penetrate wider local and international markets.

The project was successful at demonstrating how communities can develop and benefit from organic agriculture in order to sustainably manage their environment, as well as to generate socio-economic benefits. Among the environmental results achieved, several types and quantities of POPs have been eliminated from the community as local farmers have abandoned the use of inorganic fertilizers and have holistically embraced organic farming methods. The community constructed 20 liquid manure plants to improve soil fertility management, which are now being used by farmers in the Makoni district. Several local farmers have even constructed their own manure plants at household level after learning the technique through demonstrations conducted by the project. The community employed Integrated Pest Management (IPM) strategies such as intercropping and use of natural herbicides and plants for pest control. The project also promoted biodiversity conservation, with the creation of a gene bank through the establishment of 10 hectares of farmland for planting open pollinated varieties of maize seed and wide varieties of legumes.

The project helped develop the community's capacity to capitalize on their organic agricultural activities. Communities in the project area now engage in diversified agricultural production ranging from organic dry land farming, organic horticulture production, nursery management, mushroom production and beekeeping. Farmers grow organic vegetables that include garlic, onions, tomatoes, mushrooms, and sugar beans for household consumption and for sale. As a result, the food security status of the participating community has significantly improved, while participating local farmers have reported improved and increased yields from their fields. On average, participating farmers have been able to generate annual incomes of US$ 250 to US$ 300 from the sale of vegetables in local markets. 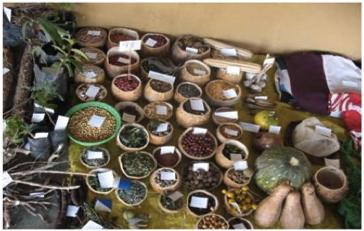 The project has also revived, empowered and motivated the Makoni community to take the lead role in their own community's developmental issues. Following this project, the MOFA was able to secure GEF SGP funds for a follow up project. Many women are in positions of leadership in the association. Despite the initial perception by men in the community that the project's activities were only suitable for women, the visible benefits of project activities and organic farming have attracted more men to join the MOFA. Out of over 500 farmers in the association, about 60% are women. This shows that the community is gender aware and able to attract both women and men to its objectives and activities.

A strong policy framework has helped the farmers to achieve one of their major goals: to attain internationally recognized organic farming certification. In this context, the project managed to mobilize the local farmers as well as the local government and traditional leadership to draw up by-laws targeting the promotion and implementation of organic agriculture in the community. As a result, this group was the first group of local farmers in Zimbabwe to receive organic farming certification. Today these farmers are working with other organizations such as Zimbabwe Organic Partners and Promoters Association and the government in a bid to develop a National Policy on Organic Farming.

Tsitsi Wutawunashe, National Coordinator, Email: This email address is being protected from spambots. You need JavaScript enabled to view it.