THE GEF SMALL GRANTS PROGRAMME (SGP) SHARES EXPERIENCES AND RESULTS OF ITS CLIMATE CHANGE WORK AT THE COP 19 AT THE UNFCCC IN WARSAW, POLAND
Print 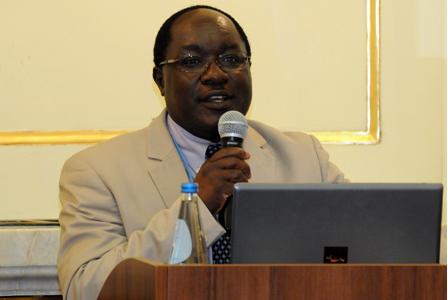 harles Nyandiga, joined the panel of "Challenges and Innovations From The Field" at the 2013 Development and Climate Days – an event which ran on the periphery of the nineteenth Conference of the Parties (COP 19) to the UN Framework Convention on Climate Change (UNFCCC). The panel, which was facilitated by the GEF and the Red Cross Climate Centre (RCCC), explored bottom up approaches and challenges experienced by practitioners and development partners while formulating and implementing Community Based Adaptation (CBA) projects.

Illustrating SGP experiences in five countries across the world, Mr. Nyandiga discussed prominent CBA implementation challenges encountered, which included a range of logistical, technological, governance and socio-cultural factors. SGP's experiences offer some common elements and lessons. Among the solutions Mr. Nyandiga presented were improving collaboration with partners, enhancing community-engagement, as well as providing policy implementation guidance to communities and the society at large. A key requirement for the successful design and implementation of CBA projects was strengthening of the evidence base from community projects through rigorous participatory scientific monitoring and recording of experiences.

November 20th, 2013 UN Secretary General Ban Ki-moon and UNFCCC Executive Secretary Christiana Figueres championed low carbon lifestyles by taking a spin on Ghanaian bamboo bikes at the "2013 Momentum for Change - Lighthouse Activities", a side event which recognizes the most innovative initiatives combating climate change. The bicycles, which were built from locally grown bamboo, were developed by the Ghana Bamboo Bikes Initiative with the support of the GEF Small 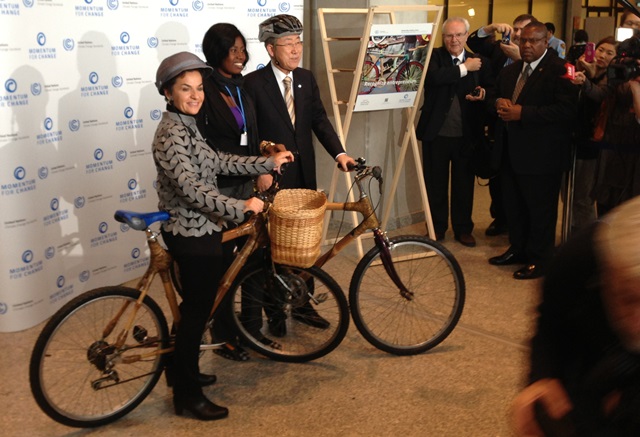 SGP Ghana helped the women-led initiative, which targeted primarily women and youth with little or no education, develop into a social enterprise. With SGP's assistance, the Ghana Bamboo Bike Initiative managed to improve training for the construction of bamboo bicycles and obtain international certification. A one hectare bamboo plantation, a training center and bike factory were also established and are fully operational. The SGP project has not only provided stable, higher-paying jobs for ten bike builders, but also created jobs along the value chain for the suppliers of bamboo and distributers of the bicycles. The Ghana Bamboo Bike initiative has already received numerous awards, including the 2010 UNEP SEED Award, the 2010 Clinton Global Initiative University project commitment selection, and the 2012 Samsung Generations for Peace Award. To date, the project has been replicated in two other communities.

November 21st, 2013 On the occasion of COP 19, SGP took the opportunity to launch its new publication "Empowered Generation: Youth Action on Climate Change through the GEF Small Grants Programme". The publication features more than ten projects from communities across the world, where youth have played a significant role in addressing climate change. Employing a range of tools, young people have led and promoted the use of renewable energies, carbon footprint mapping, tree planting, disaster risk reduction measures, as well as communicated the urgency of taking action on climate change through environmental awareness raising events. The publication also includes a more detailed description of SGP's award-winning bamboo bicycle project in Ghana.