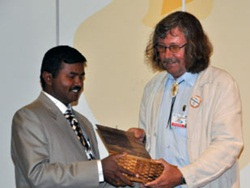 The convention received 27 nominations from all over the world, including individual experts and free-lancers, government institutions, industry, civil society and academic institutions. Among these, the Center for Public Health and Environmental Development (CEPHED), an SGP Grantee from Nepal won the PEN Awards for Capacity Building and Outreach Category.

With the support of SGP the CEPHED completed a detailed research on "Study of PCBs and their Impact on Health and Environment" in 2010, widely disseminating the impact of PCBs on public health and environment, and successfully completed four awareness raising training workshops. As a result from this awareness raising and capacity building activity, hospital staff from Kanti Hospital started to practice waste segregation, dispose waste in color coded box, and implementation of non burning mode of waste disposal. Also, the Grill Workers Association has gradually started to phase out the use of PCB contaminated transformer oil during welding process.

Mr Ram Charitra Sah, Executive Director, Centre for Public Health Environmental Development (CEPHED) (on the left), received the award in a ceremony organized by the Secretariat during the Fifth meeting of the Conference of the Parties to the Stockholm Convention, being held in Geneva, Switzerland.

Ana Maria Currea, KM, GEF Small Grants Programme | This email address is being protected from spambots. You need JavaScript enabled to view it.