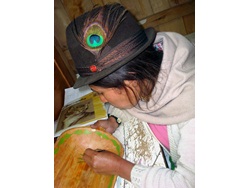 Washington, D.C. November 19, 2010 – A pioneering program that helps communities and civil society meet borderless environmental challenges including climate change and biodiversity at the local level now has an even stronger country-driven focus, the Global Environment Facility (GEF) announced Thursday.For nearly two decades the GEF Small Grants Program (SGP) has made a direct impact through indigenous and community-based organizations in more than 124 countries. Grants can be awarded up to a $50,000 ceiling with an average grant typically about $25,000 per project. Over its history the GEF has invested a total of $495 million in 12,000 projects with another $429 million invested through in-kind and in cash co-financing.

Under the GEF's latest four year funding cycle approved this spring, 13 more countries are expected to join the network which is designed to empower local communities make investment choices that have the multiple benefit of generating green jobs at home while protecting the global environment.

One example of how this catalytic program makes both a local and global impact can be found in the mountainous Mongar area of Bhutan, where SGP is preparing to support women's groups in indigenous communities build an eco-friendly business that will produce and market herbal cosmetics with local organic ingredients. The project will be the first of its kind in the country and will help over 380 households boost income while at the same time mproving forest conservation and raising awareness on the value of biodiversity-based products.

Under the GEF's latest funding cycle that ends in 2014, GEF anticipates that the SGP Core funding will support at much as 3,640 new projects, a 27% increase over the four year period. The GEF program is implemented by the United Nations Development Programme (UNDP), one of the GEF's agency partners and is part of the network's larger reform agenda to strengthen relations with key stakeholders which include civil society and community based organizations.