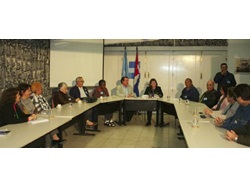 The GEF Small Program (SGP) in Cuba signed cooperation Agreement with the Latin World Film Studies Program to promote knowledge as a key tool for environmental education and protection.

The main objective of the agreement is to exchange information about environmental projects, between the Small Grants Program of Cuba (PPD) and the project "Nature Secret of Cuba" of Latin World Film Studies as a way to improve and strengthen environmental education.

The agreement was signed between Ms. Susan McDade, resident coordinator of the United Nations System in Cuba and UNDP Resident Representative on behalf of the Small Grants Programme and Dr. Omar Olazabal Rodriguez, Director of the Latin World Film Studies.

To conclude, the documentary "Build awareness" by Latin World Film Studies Program was presented. The documentary shows the results of an SGP project in the community of Carahatas in Villa Clara, where the community developed a farm for the cultivation of sponges as an economic alternative to fishing, contributing to the elimination of destructive fishing practice known as "chinchorreo".