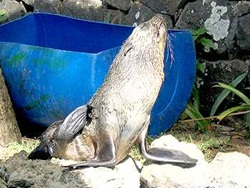 A baby seal is being helped back to its natural habitat by the SGP grantee 'Reef Conservation Mauritius'.

After a voyage of more than 3 800 kilometers from the Antarctic, the exhausted baby seal stranded on the beaches of the tropical island of Mauritius in the beginning of August.

The unusual guest belongs to the endangered species 'sub antarctic fur seal' and is believed to be between 10 and 14 months old. 'Reef Conservation Mauritius', a local NGO and SGP grantee, has adopted the female baby seal and named her 'Fokette'.

The NGO is now cooperating with a South African research institute to transfer 'Fokette' back to its natural habitat.