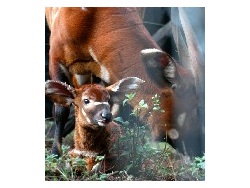 The wild bongo population was decimated by unrestricted hunting and poaching and lions, and the last sighting was nine years ago. The goal is to re-establish the bongos, bred in captivity in the US, in their species' native habitat, now a World Heritage Site.

Their return is linked to a broader conservation effort — the Community Management of Protected Area Conservation (COMPACT) initiative, a joint programme of the UN Foundation and the Global Environment Facility's Small Grants Programme and administered by UNDP, that is helping communities protect ecosystems and species while improving their livelihoods.

Partners in the bongo repatriation effort include, among others, the Rare Species Conservatory Foundation, 13 US zoos, the United Nations, the Donner Canadian Foundation, the UN Foundation, the Kenyan Government, and Kenyan civil society organizations.

"This innovative partnership embodies the philosophies of both the UN Foundation and the World Heritage Program," said Timothy E. Wirth, President of the UN Foundation, which provided funds for the repatriation. "The bongo becomes a metaphor for what's possible in the world and what the UN does by bringing people together to build a better world," he said.

"The plight of the bongo is a vivid reminder of the fragility of Africa's unique natural heritage," said UNDP Administrator Mark Malloch Brown. "Our hope is that returning these animals to their native habitat will be a boon to local wildlife and, just as important, to the people who live and work around this magnificent mountain."

During the past three years COMPACT has supported 28 community projects through an investment of almost $1 million in Kenya (and $6 million worldwide in five other World Heritage Sites). An eco-resource centre will soon open to the public, thousands of indigenous trees have been planted, and promotion of modern beekeeping, use of energy-efficient stoves, and efforts to reduce garbage dumping are protecting Mt. Kenya forests.

COMPACT has produced 10,000 booklets and 1,000 posters to create awareness about protecting the bongos and their habitat in schools and communities, and supports education activities of the William Holden Wildlife Education Centre, which hosts over 7,000 visitors annually at the centre and runs an outreach programme in seven districts in the area.

"We Kenyans have received a rare second chance with the repatriation, and with the increasing participation of communities in the management of natural resources, the repatriation will raise the level of pride and ownership of our wildlife," said Francis Maina, the centre's education coordinator.

The bongos from the US were raised in captivity and cannot be released into the wild. They will be part of a breeding programme at the Mount Kenya Game Ranch, and their offspring will gradually be introduced into the National Park. Soon after arrival, in fact, a female bongo was born — and has been named "Kenya".