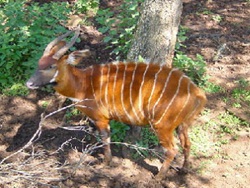 The mountain bongo (Boocercus eurycerus isaaci) is a flagship species for one of the world's richest forest ecosystems, adjacent to the highest priority plant-diversity hotspot, the Eastern Arc Mountains of Kenya. This shy bovid is a visually striking, well-recognized ambassador for East Africa's montane forests, and one of the most popular and prized antelopes maintained in zoos. The mountain bongo is a subspecies of the nominate race, B. e. eurycerus, and is highly endangered, restricted at most to three small, Kenyan sub-populations: Aberdares Conservation Area, the Mau Forest, and Mt. Kenya National Park (East 1999). While population estimates are inferential (Butynski 1999, East 1999), altogether less than a hundred mountain bongo are believed to survive in the wild.

As wild stocks have plummeted in the past fifty years-primarily due to unrestricted hunting, poaching, and lion predation the captive population has flourished. Between 1966 and 1975, wild mountain bongos were imported to U.S. zoological institutions from the Aberdares, with a total of 36 animals founding the North American captive bongo population (Bosley 1998, Surratt in litt.). As of 31 December 2001, this population totaled 323 individuals (130 males, 190 females, 3 unknowns at 66 institutions) representing the most robust captive group anywhere (Bosley 2002). In contrast, the total captive population in Africa stands at 21 (8 males, 13 females) distributed among four institutions. Despite the small number of founders in zoological collections-all of which originated from Mt. Kenya stock-survivorship and fecundity remain high even after 20+ years of captive breeding. Today bongo husbandry is well established, and the global captive population has exhibited an average growth rate of 6.7% per annum over the past five years.

Formal protection for bongo across Mt. Kenya, Aberdares, and Mau has proven difficult to enforce, as illegal hunting with dogs has exacerbated the population decline largely attributed to increased lion predation since the mid-1980's (Kingdon 1982, Butynski 1999). East (1999) reported that the mountain bongo was extremely rare on Mt. Kenya as of 1998, but likely the last mountain bongo died on Mt. Kenya during 1994-95 (Hunt, in litt.).

The new Kenyan government has announced its intentions to make wildlife conservation and eco-tourism top priorities, empowering the Kenya Wildlife Service (KWS) to move forward with the bongo project and related initiatives to reinforce the Mt. Kenya National Park as a critical World Heritage Site. Efforts to protect the Mount Kenya ecosystem over the past three years have been remarkably successful as demonstrated by a UNEP-KWS aerial survey conducted in 2002. By comparing 1999 aerial photographs, the recent survey revealed that, for example, illegal logging was reduced by 99% overall with varying figures for different types of trees, and that a net decrease of 62% (205 kilns) of charcoal kilns had occurred during the period. The improved conservation of Mt. Kenya WHS is due to significant enforcement by KWS and the combination of efforts of a large number of institutions and partners including the UNF SGP COMPACT project. This initiative will build on these partnerships and initiatives and is a significant step to reintroduce the Mountain Bongo to its original habitat range.

The Mountain Bongo Project has aimed to establish an in situ captive breeding program, in a natural setting, as the first phase of several conservation steps required to reintroduce mountain bongos to the wild. Put simply, the initiative has sought to return a significant wildlife resource to its country of origin, and ultimately yield a self-sustaining wild population. The rationale for the project stems from several key factors:

In early 2004, the Mountain Bongo Project will return hardy animals (4 males and 14 females) from the U.S. as breeder stock for a Kenya-based management program. Discussions among the Kenya Wildlife Service; Rare Species Conservation Foundation (RSCF) directors; American Zoo and Aquarium (AZA) Association Bongo Species Survival Plan (SSP) Chair Ron Surratt; and the Peace River Refuge directors have identified the Mount Kenya Game Ranch Ltd. (MKGR) in Nanyuki, Kenya, as the most appropriate recipient for the first group of animals to be trans-located. MKGR is well respected within the conservation and the tourism arenas in Kenya, and has maintained a small herd of bongo for many years. In addition, the facility is adequately equipped and staffed to serve as the core breeding operation in Kenya, and is strategically located at the base of Mt. Kenya, where the mountain Bongo is endemic, facilitating transfer of future offspring to park lands.

The Bongo Repatriation Advisory Group (BRAG) was formed as an advisory body to the project.

Eighteen bongos (4 males, 14 females), from 18 months - 3 years of age will be shipped initially to Kenya in January 2004. Minimally related animals with high familial fitness were selected from multiple zoological facilities that maintain bongo in natal/social groups with parent-reared young. Familial fitness was evaluated by examining the survivorship and reproductive histories within each potential candidate's maternal and paternal pedigrees for at least the last two generations. Whereas captive histories did not necessarily predict wild survivorship, they provided quantitative information about general hardiness and reproductive potential.

Institutions holding selected animals were then invited to participate in the repatriation effort and to transfer of legal title for the selected animals to RSCF, which has been coordinated the overseas shipping process and for securing all relevant repatriation permits through US Fish & Wildlife Service regulations, as well as through appropriate international scientific and CITES guidelines. As of November 2003, participating zoological facilities in the U.S. have completed the transfer of the selected Bongos to a consolidation facility at the White Oak Conservation Center in Florida. The participating facilities have also contributed funds for the upkeep of each animal to help cover pre-shipment housing, testing and animal support needs.

Two 10-acre breeding enclosures and one 1-2 acre holding pen have been prepared in the Mt. Kenya Game Ranch to receive animals from the U.S. Chain link and electric fencing-routinely used for game enclosures at MKGR and locally available-along with conventional feed bunks and shelters have been installed. Precise enclosure location and design were determined during the BRAG's site visit to MKGR.

To ease the translocated animals' dietary transition, two tons of antelope feed (ADF-16 or equivalent) and nursery cloth (used to create visual barriers) will also be palletized and shipped to Kenya with the animals in early 2004.

Consolidation and overseas transportation of the animals

Selected animals have been successfully consolidated 3 months prior to overseas shipment at the White Oak Conservation Center in Florida for pre-shipment veterinary care and testing. It is anticipated that the animals will be shipped via chartered airfreight to Nairobi and then transported from Nairobi to MKGR via lorry. The Chief Veterinarian of KWS, along with the Director of RSCF and approximately 6 attendants will accompany the Bongos during the 24-hour journey from Florida through to their final delivery to the foothills of Mt. Kenya at the MKGR.

Durable composite crates meeting IATA specifications were constructed for transportation of the animals. Unlike conventional wood, composite materials extend crate longevity so that they can be used to trans-locate animals within Kenya (e.g., for eventual reintroduction of bongo into national parks).

The Bongo repatriation initiative will directly benefit the Kenyan wildlife authorities, particularly the Mt. Kenya National Park management. The project has been Kenya's first opportunity to participate in the complex undertaking of large mammal repatriation, and will therefore serve as a pilot case for developing relevant policies and procedures at the national level. National counterpart institutions and partners will enhance their skills in captive breeding techniques. Indirectly, the repatriation of the bongo antelope will also benefit the communities around Mt. Kenya World Heritage Site. The publicity the project has already received until now has helped boost the nature tourism industry in and around Mt. Kenya, which employs a significant number of local people. 'National Geographic Television' and 'National Geographic Today' have expressed their interest to cover the project once translocation activities begin. The GEF SGP is ready to contribute funds to enable community-based organizations and NGOs in the Mt. Kenya area to participate in and contribute to the conservation of the Bongo after its reintroduction to the wild.

Mt. Kenya National Park and World Heritage Site is of critical importance to local communities, the people of Kenya, and the world at large. The Kenyan government's steady progress in enforcing legislation to protect Mt. Kenya's forests has shown positive, tangible, results; and KWS and partners are ready to take steps to bring back one of East Africa's most recognizable flagship species. The repatriation of the Bongo thus offers an exceptional opportunity to attract global public attention to the outstanding universal value of the WHS and to the issues surrounding biodiversity conservation and critical ecosystem restoration.

Repatriation of species extinct in their original habitat has not been attempted previously in Kenya. This innovative intervention - supported by highly qualified and experienced partners - therefore provides a testing ground and learning experience for national conservation groups and institutions. The partnerships established by this project bring together Kenyan government institutions; multilateral organizations; national private sector and national and international NGOs; U.S. zoos, and research bodies; underscoring the founding tenets of the World Summit on Sustainable Development (WSSD) and the United Nations Foundation (UNF).

The Repatriation of the Mountain Bongo to the Mt. Kenya WHS supports several objectives of the UNF Biodiversity Program Framework. In particular it is consistent with the following guiding principles and goals:

For further information please contact Terence Hay-Edie at This email address is being protected from spambots. You need JavaScript enabled to view it.