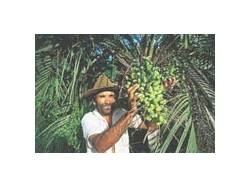 But now, it turns out, the cerrado has become the most lucrative part of the Santos farm, ever since the Centro de Agricultura Alternativa (Centre for Alternative Agriculture) began buying the cerrado fruit that Mr. Santos and his family collect. Last year, they sold more than 1,000 kilogrammes of coquinho palm fruit and around 600 kilogrammes of wild passion fruit to the Centre, which turns the fruit into juice pulp and sherbet. Together with a few hundred kilogrammes of pineapple, the sale of wild fruit earned the family more than 800 Reals (US$230)-no minor sum in a region where many agricultural workers earn only150 Reals per month.

"This project has been very good for us," says Mr. Santos, who used the money earned to buy furniture, tools and a small pump, which now delivers running water to his humble adobe house. The family used to carry water up from the stream about 200 metres below their home.

The Santos' are just one of 230 families in the semi-arid region surrounding the city of Montes Claros, in the north of Brazil's Minas Gerais state, that are participating in the Centre's native fruit project. After collecting the wild fruit, they send it to a processing plant, where it is cleaned and squeezed, and the pulp is bagged and frozen. The pulp is then sold to schools, hospitals and restaurants, where it is mixed with water and sugar to make juice. Last year the plant produced 32 tons of fruit pulp, with a market value of 128,000 Reals ($37,000).

The project was the brainchild of Alvaro Carrara, who was raised in the southern extreme of Minas Gerais, near the humid Mata Atlantica rain forest. After he moved to Montes Claros in 1993 to work for the Centre, he began visiting communities in the cerrado and was surprised by the quantity of fruit on the trees. "From October through December, the cerrado is full of fruit," he says.

Mr. Carrara soon began investigating ways to exploit that natural abundance. His efforts paid off in 1996, when the Centre received funding from the Global Environment Facility's Small Grants Programme, implemented by UNDP, to build a fruit processing plant. The Small Grants Programme supports hundreds of such projects in developing countries around the world in an effort to help rural communities become the custodians of their area's biodiversity.

"The cerrado is rich biologically, but it is also threatened," said Donald Sawyer, Director of the Instituto Sociedade, Populaçao e Natureza (Institute for Society, Population and Nature) in Brazil. Two thirds of Brazil's cerrado has already been destroyed or significantly altered, Mr. Sawyer says, mostly due to ranching, soybean plantations and other monocultures. The fruit juice project, he says, shows that there are viable alternatives to activities that destroy the cerrado.

Mr. Santos was the first farmer in his community, Aboboras, to participate in the project, but since 1997, nearly a dozen of his neighbours have joined him. Aboboras is just one of 56 communities in 14 municipalities currently selling native fruit to the project, and the number of participating farmers continues to grow. Although they represent just a fraction of the region's more than two million inhabitants, the income from collecting native fruits has proved vital to those families. The northern quarter of Minas Gerais is one of Brazil's poorest regions, with earnings around half the national average, and where 75 percent of the population lives below the poverty line.

For a subsistence farmer, Mr. Santos' life has changed significantly. Before harvesting the wild fruit, his only income was from sporadic trips to the market to sell his crops. Those trips involved rising at 3:00 am, loading sacks onto his horse, riding to the paved road, and catching a bus into town. Now, a truck from the Centre picks up fruit from Aboboras once a week during the September to December harvest season.

"It's more money, and less work," Mr. Santos says. And the trees reproduce naturally. He attributes the abundance of new coquinho palms to the fact that his neighbours have stopped lighting fires, which were commonly used to clear land for planting. "Everybody who collects fruit is now conserving the cerrado," he says.

For Mr. Carrara, managing the native fruit project has been plenty of work. A forester by training, he has had to grapple with everything from health department regulations to marketing problems during the past seven years. The Small Grants Programme has helped him prepare for these challenges through the Rede Cerrado-a network of 60 groups working in the cerrado ecosystem-and a four-month course on environmental policy run by the Instituto Internacional de Educaçao para do Brasil (International Education Institute of Brazil).

Various other organizations have also assisted the project, such as the Rural Workers Union, which has helped organize communities, and two local universities, which have helped the Centre's juice plant meet health department standards and analyze the nutritional value of the fruit pulps. The seed money from the Small Grants Programme was followed by funding from two church-based charities and the federal Fundo Brasileiro para a Biodiversidade (Brazilian Fund for Biodiversity), which helped build a distribution centre in Montes Claros. The Small Grants Programme is currently financing the expansion of the project, to include more species and more communities.

The fruit pulp and other products are marketed under the brand Grande Sertao-the traditional name for the region-a cooperative enterprise created to run independently from the Centre. Grande Sertao currently sells 15 different fruit pulps-seven from native species, and eight from exotic fruits such as pineapple and mango, which are available when the cerrado's trees aren't producing. They also sell six flavours of sherbet, frozen pequi fruit, jellies and various other items.

Mr. Carrara says that Grande Sertao should soon be a self-sufficient, farmer-owned enterprise that markets an array of agricultural products. Mr. Carrara says farmer participation has been a priority of the project since its inception. During the harvest time, two people from each community are required to help out at the pulp plant, and representatives from every municipality attend periodic meetings to oversee the project's development.

The head of sales for Grande Sertao, Waldomiro da Silva, is a farmer whose initial involvement with the project was collecting and packaging pequi fruit. He explained that he doesn't merely sell Grande Sertao's products, he markets the concept of a project that benefits rural families while conserving the environment.

"The more I sell, the more products I can place on the market, the greater the opportunity I give my colleagues in the countryside," he said.

Mr. Silva is confident that Grande Sertao will soon be selling 3,000 kilogrammes of pulp per month, which is considered the break even point, since it will provide enough income to cover the salaries of everyone at the processing plant and distribution centre. He explained that most of the pulp is currently sold to hospitals and schools, a strategy that gets more people to try the juices without spending heavily on advertising.

"The great thing about selling to schools is that you are also teaching kids to consume fruits from the cerrado," he says.

Freelance journalist David Dudenhoefer has been covering environmental issues in Latin America for more than a decade.

Brazil at a Glance

Human Development Ranking: 73 out of 173 countries