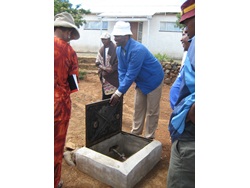 For the 2010 UNDP Staff Retreat in Lesotho, which took place on 17 – 19 March at the Leribe Hotel, a decision was made that the first day be dedicated to visit projects so that the staff could see the impact of UN interventions on the lives of ordinary Basotho. Of the six projects visited, two were GEF Small Grants Program projects: (i) a biodiversity project focusing on the preservation of the gene pool of the indigenous Sesotho chicken located at Ha Notsi in Mafeteng District and (ii) a biogas production located in Matelile Ha Seeiso also in the Mafeteng District project aimed at promoting rural energy technologies that are also environmentally friendly.

The GEF Small Grants Programme (GEF-SGP) country programme in Lesotho was established in December 2007 and the grant making process was initiated towards the end of 2008. The Country Programme now boasts a total of 16 projects in its portfolio with a total of USD 499 974.26 awarded in grants to local communities through non-governmental and community based organizations (NGOs and CBOs).

Biodiversity loss is a global environmental problem that affects livelihoods of people worldwide. For Lesotho, loss of the gene pool of indigenous chicken poses several significant problems such as lack of disease resistance in poultry. These chickens are threatened to extinction as local farmers are increasingly opting for exotic breeds over indigenous chickens. The Rural Self-help Development Association (RSDA) with GEF-SGP support is implementing a project for the preservation of the gene pool of the indigenous chicken through breeding and passing on the chickens to vulnerable households using the pass-on-the –gift system.

As the Director of the Rural Self-help Development Association (RSDA), Mrs. 'Mampho Thulo, mentioned "It is through the support of the GEF Small Grants Programme and UNDP that other donors like the Japanese are coming in to enhance the project impact." 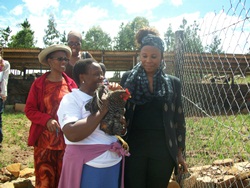 The Matelile community like most of rural communities in Lesotho depends on biomass for fuel in an area that is very dry with the result that it badly eroded. Bottled gas has become increasingly expensive and management of waste water at the Centre is a big issue as local sewer tankers are not reliable. The Matelile Tajane Community Development Trust has thus, with SGP support, installed a biogas digester to address the problems and to demonstrate and promote alternative energy technologies.

The UN Resident Representative (RR), who is also the UN Resident Coordinator, was among those that signed up for the SGP projects site visits. During the visits, grantees briefed the UN Team about their projects, entertained their questions and comments and took them on a tour of their projects. It was during site visits report-back session that observations, impressions and suggestions for improvements were shared.

The UNDP Resident Representative in sharing her field experience highlighted (i) the simplicity of the approach and the setting within which the projects are implemented; (ii) the depth of knowledge, dedication and the amount of work done by a few people with limited resources; (iii)the innovative ways in which grantees operate to forge sustainability of project results, with particular reference to the pass-on-the-gift system to be used in the indigenous chicken project; and (iv) the importance of integration and partnerships in project implementation to leverage additional resources, with specific reference to meeting the high water requirements for bio-digesters especially when installed in drought prone areas.