AQUAPONICS - THE GENESIS OF AN INDUSTRY IN BARBADOS
Print 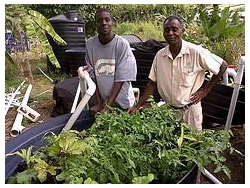 Located in the South-Central hills of Barbados in the Caribbean, is a small low-income village called Bairds, with no more than 30 houses and 150 people who are mostly small farmers. In that village lives a young visionary by the name of Damian Hinkson, who has been experimenting with aquaponic prototypes from his days in secondary school and who is the founder of the community based organization, Bairds Aquaponics Association. The association, with the help of GEF SGP, is implementing a project with the ambitious goal of contributing to alternative forms of sustainable agriculture, and creating a viable community enterprise which can employ young people from the village to sell and provide maintenance for aquaponic units in Barbados, and later the Eastern Caribbean.

Aquaponics is a semi-closed system in which plants and fish live in a symbiotic relationship. The system is a combination of aquaculture (fish farming) and aquaponics (soil less farming), in which fish in tanks produce nutrients which in high concentrations are detrimental to them but food for plants. In a circulation system, the nutritious water from the fish tanks is circulated through a series of pipes where the plants absorb the nutrients and the water is returned harmless to the tanks. The only additives are water which is lost from evaporation and through absorption by the plants, organic based fish food and new fingerlings from time to time. In this system, a variety of crops can be grown which include tomatoes, lettuce, carrots, broccoli, eggplant, melons, okra, corn, beets and others. Such a system can be the source of protein and vegetables for a small or big family, and produce surplus for sale in supermarkets, depending on the size of the unit. 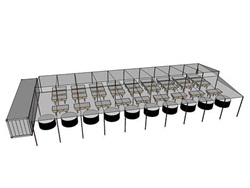 This SGP project has five components: capacity building; establishment of a demonstration site along with 9 satellite facilities in the village; public awareness and education campaigns; the development of standards and a certification process in collaboration with the Government and other stakeholders; and the development and growth of a community business enterprise to sell and maintain smaller units to households around Barbados. The project period is two years with a total budget at inception of US$69,504, with a contribution of US$43,000 from the GEF SGP, and US$10,000 in cash and US$17,510 in-kind co-financing from the community. Since commencement, the project has attracted additional co-funding from Mc Gill University, the Inter American Institute for Cooperation on Agriculture, and the Ministry of Agriculture in Barbados. It is estimated that by the end of the project the co-funding will far exceed the contribution by GEF SGP.

After approximately one year of project implementation, the members of the group have completed several courses in business management and marketing; experimented and developed home grown solutions to the technology; developed strong partnerships with the Government and the private sector; drafted a business plan; promoted the project using various forms of internet technologies; completed preparation of the site for the aquaponics facility; ordered most of the equipment required; established a small office; undertaken several public awareness and education activities; and is currently in the process of constructing the superstructure for the demonstration site. The first experimental crop has also been reaped and the project is expected to have a national launch and open for business in September 2010.

Already, the demonstration site has been visited by officers of the Ministry of Agriculture, as well as local and foreign students and even tourists who saw the description of the project on Facebook. In March, the improved prototype was exhibited at AGROFEST, Barabados' premier annual agricultural exhibition, where it captivated the interest of hundreds of people and the media.

The project will include aims to create environmental, social and economic benefits. The project will demonstrate alternatives to green revolution farming in which toxic pesticides are the order of the day and demonstrate how humans can produce food in a non-harmful way to the environment. The project will also contribute to food and nutritional security in the community of Bairds and Barbados, and create sustainable employment for at least 4 persons during the first six months with an increase expected as the community business grows. Above all, this project will demonstrate one way of growing crops organically, in areas where soil fertility and soils have been contaminated with various agrochemicals.

Expectations are high, because an idea which first germinated in the mind of a 13 year old is on its way to revolutionizing a village and contributing to food and nutritional security in Barbados. In this GEF SGP project, like many others, the process has become the "end" with GEF SGP playing a facilitating role as a partner.