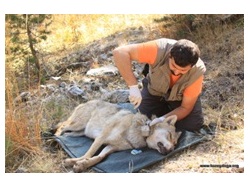 Kars region of northeastern Turkey is a high plateau located between two important global biodiversity hotspots, the Caucasian and Iran-Anatolian. Kars region is also rich in wetlands, large meadows and pine forests. Besides the high diversity of birds and plants, Kars is rich in large carnivorous mammals such as brown bears, wolves, and lynx. These predators, at the top of the food chain, are indicators of a healthy environment, and comprise flagship and keystone species.

With the support of the Global Environment Facility's Small Grants Programme, implemented by the United Nations Development Programme, the KuzeyDoga Society started a project in April 2010 aimed to understand the status of large carnivores in the northeastern part of Turkey to evaluate and generate awareness about the threats they face and find possible solutions. The project also conducted environmental education and outreach to the public and the media to raise awareness and promote the acceptance and understanding of these animals by local people, encourage local administrators to enforce the current laws for the protection of these animals, and help enact long-term conservation measures. This project also received support from the UK Born Free Foundation from UK for studying carnivores with camera traps.

Through the project the Ministry of Forestry and Water Affairs provided GSM/GPS collars and the private Turkish Telecommunication Compan Turkcell Assoc. supported the fieldwork. As a result, the organization was able to monitor wolves GPS coordinates via regular SMS text messages and capture key data that helped them monitor and understand the distributions of the wolves and look at how often they interact with local people.

Prof. Josip Kusak of Croatia, a well known wolf biologist, donated three additional radio collars to the project and helped the Kuzey Doga Society to catch and release the wolves. These collars were placed on three young, orphaned wolves that were brought to KuzeyDoga in July 2011 and were successfully rehabilitated and released back to the wild in November 2011. 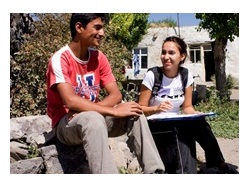 In addition, 684 local people were surveyed in 24 different villages by 16 volunteers covering 1,980 kilometers on local wildlife, conflict with large carnivores, perception on wildlife, and other related issues. The results showed that the most common large carnivore that the local people meet in the field is the brown bear. Most locals see these animals while logging or picking up wild fruits in the forest. Wild animal attacks frequently happen when it is summer time when local people take their livestock's to the highlands for grazing. Human attacks by brown bear usually happen in spring time when brown bears have babies. The survey also highlighted the fact that local people did not have knowledge on wildlife observation tourism, but are willing to have tourists and take part in tourism if it is possible.

Another major accomplishment of the project was the creation of Turkey's first wildlife corridor, which Kuzey Doga president Dr. Cagan Sekercioglu proposed in 2008. As per the Minister's interest, the corridor map was created and the corridor route was visited with ministry officials in May, following which an MOU for the creation of the wildlife corridor has been signed between the Ministry and KuzeyDoga in December 2011.

Turkey's First Wildlife Corridor will cover 23,500 hectares and will extend 82 kms. from the Sarikamis Forest-Allahuekber Mountains National Park to the Posof forests on the Turkey-Georgia border. This corridor will provide additional habitat for large carnivores, connect their isolated populations, and help reduce the human-carnivore conflict. In addition, ecotourism workshops in Sarikamis were conducted for promoting village-based wildlife tourism in the region.