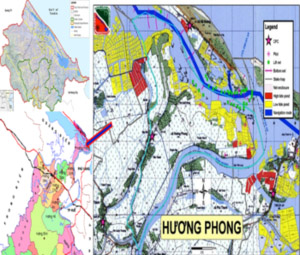 The Community-Based Adaptation (CBA) project is a five-year project funded by the Global Environmental Facility (GEF) through the Strategic Priority for Adaptation (SPA) and implemented by UNDP through the GEF Small Grants Programme (GEF SGP). In central Viet Nam, the Consultative Research Centre on Natural Resources Management (CORENARM) is implementing the project "Contributing to integrated management of natural resources to adapt to climate change", which is funded by CBA through GEF SGP. The project aims to build capacity of local stakeholders, including the commune authority and community members in Huong Phong Commune, in Huong Tra District, Thua Thien Hue province, to increase resilience to climate change. The project focuses on integrated natural resource management and promotes sustainable use of natural resources for local economic development and livelihoods.

Over the past few years, the commune has suffered severely from the impact of natural disasters, including storms, floods, droughts and salt-water intrusion. The increase in these harsh natural phenomena is at least in part attributed to climate change. One of the most pressing needs in the region is therefore the improvement of people's livelihoods and building resilience to climatic changes.

After two and a half years of implementation, the project has achieved very encouraging results. Commune leaders and communities have a better understanding about climate change issues and the importance of sustainable management of natural resources. Through the project, an integrated resource management plan with detailed resource maps was developed for the commune land. The plan was developed in a participatory way with the involvement of community members and covers a five year period, from 2011 to 2015. The plan focuses on a range of issues such as water resource management, climate-resilient agriculture and rehabilitation of a mangrove forest, as well as socio-economic development planning for the commune. 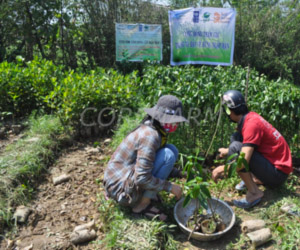 The only mangrove forest remaining in the lagoon, Ru Cha, is now being protected through the efforts of the community. In order to conserve its biodiversity and prevent salt-water intrusion, a nursery has been built and is managed by the community. The nursery has provided 10,000 seedlings for planting along the dykes, riverbanks and household aquaculture pond banks. Five community members have also been trained as tour guides for community ecotourism development, which helps conserve the forest and its biodiversity and generates additional income for the local community. 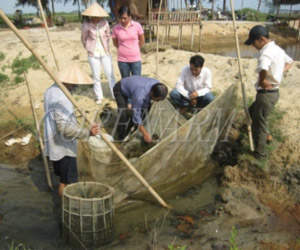 To increase resilience of the local community to climate change impacts, the conservation of local endemic salinity resistant rice varieties (chien den, chien trang) is extremely important. With the successful testing of the two crops on six hectares of agricultural land, the district authorities have now provided funding to expand these efforts throughout Huong Phong commune and other neighboring communes. The project has also introduced integrated rice-fish cultivation, which complements the introduction of resilient rice varieties as well as generating additional income for the local community.

In general, the climate resilient agriculture models tested by the project demonstrate promising potential for replication as they bring higher and more stable income for the local community while reducing vulnerability to a changing climate. The project has developed technical guidelines to document the resilience measures tested by the project. These guidelines will help replicate these successful models within the Huong Phong commune as well as in other communes in the region and assist local communities to adapt to climate change impacts.

Ms. Nguyen Thi Kim Anh, National Coordinator, Email: This email address is being protected from spambots. You need JavaScript enabled to view it.