UKRAINIAN SCHOOLCHILDREN JOIN 'THE GREEN WAVE' CAMPAIGN: IN CELEBRATION OF THE INTERNATIONAL DAY OF BIODIVERSITY
Print 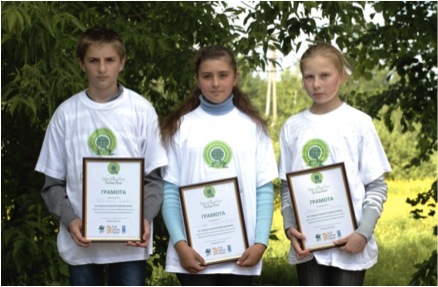 During 19-22 May 2012, the Children's Ecological Camp "Green Wave" was held in Ostky village of Rivne region to celebrate the International Day of Biodiversity. This eco-camp was organized by the GEF SGP project "Biodiversity rehabilitation of the forest ecosystem in Polissya area" with the support of local authorities, the NGO "Oberig", Ostky forestry department and four schools. The key activity of the camp was the planting of rare and endangered species within the worldwide campaign "The Green Wave". Although this campaign started in 2007, Ukrainian youth participated in the campaign for the first time. 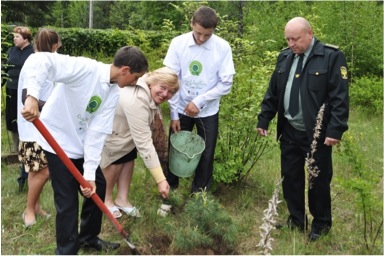 Sixty schoolchildren from four schools of the district participated in the camp. A "green" seminar was held to attract the attention of the youth to the global challenges of biodiversity protection and climate change. Furthermore, schoolchildren were shown environmental films, and took part in games and quizzes. The three winners of the eco-quiz received honorary diplomas and valuable gifts. All other active participants of the competition also received small awards.

A variety of activities were carried out over the following two days of the camp. Local experts conducted master-classes, environmental lessons and an excursion to conservation areas, which were undertaken through the joint efforts of the GEF SGP project and Ostky forestry.