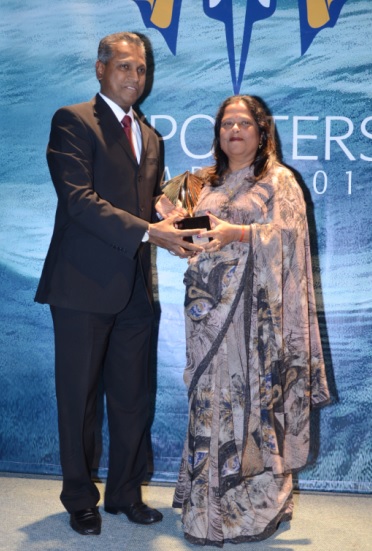 On August 22th, 2013, the Association Pour l'Education des Enfants Defavorises (APEDED), a grantee of the GEF Small Grants Programme, won the "Emerging Exporters Gold Award". The award, organized by Enterprise Mauritius, aims at inspiring more Mauritian enterprises to develop sustainable exports in innovative ways. APEDED, won against the other start-ups in its effort to produce a local brand of chemical-free medicinal and herbal teas with solar energy for the first-time. More importantly, the initiative trained and hired disadvantaged women providing a source of income for them.

APEDED's major product, "Secret Grand-Mère" (Grandma' Secrets), is a collection of 19 herbal teas prepared from medicinal plants by 20 mothers of disadvantaged children who have been given free pre-primary education by APEDED. The herbal teas are sold to countries as far as China and France. The zero-conservatives tea collection will soon be on the supermarket shelves across Mauritius.

Founded in 1996, APEDED dedicated itself to children who could not afford the schools. Anooradah Poorun, the founder of APEDED, began to ponder upon the idea of herbal tea production in 2006, when the mothers of those children lost their jobs because of the closing down of textiles factories in the country. "Since I have already taken courses in medicinal plants in India, why not put it into practice? This could help the women to have an income source, and at the same time encourage them to become entrepreneurs", says Ms. Poorun.

In 2007, SGP supported APEDED to set up a small nursery to produce organic herbal tea on the roof of the pre-primary school, training the 20 mothers of the children supported by APEDED. SGP harnessed co-financing for the purchase of a dehydrator from the British High Commission. The Agricultural Research and Extension Unit (AREU) of the Ministry of Agro-industry offered technical assistance and know-how. This initiative which puts emphasis on eradication of poverty and empowerment of women was inscribed in the spirit of promoting the conservation and sustainable use of biological diversity and the equitable sharing of the benefits from its use as advocated by the Aichi Biodiversity Targets.

As the project goes on and as orders for the herbal teas soared, APEDED became aware of the vast amount of electricity consumed in the project and its impact on climate change. At the beginning APEDED was selling around 1,000 pieces per month. Currently, the association has a production capacity of about 8,000 pieces per month and it is estimated to double by next year. To develop a more environmentally friendly energy supply system, APEDED grasped the opportunity provided by the Government's new scheme for small independent power producers and applied to SGP for a second grant of US $50,000 in 2012. As a result, 48 photovoltaic panels were installed on the roof, covering 72 square meters.

APEDED is the first NGO to use renewable energy as electricity source for sustainable livelihoods. The solar-powered production unit generates annually around 14 065 kWh electricity, of which some 10,000 KWh will be sold to the grid for an estimated revenue of US $ 6,000. As a result, 10 tons of CO2 emissions will be reduced and 52 trees will be saved annually.

APEDED now runs a community-driven small company which is conserving biodiversity, producing its own electricity from renewable sources, earning income from sale of energy and above all providing green jobs directly to 20 women and indirectly to 28 others from whom it buys medicinal plants. "I sincerely thank the SGP for this. Without your support, this would not have been possible. I just hope that we will be able to keep you proud for having supported us as long as possible", said Ms. Poorun when she was informing SGP Mauritius of the exciting news of winning the Gold award.

Just 2 months before in June 2013, Ms. Poorun received the Green Africa Award in the category of Highly Commendable Award – African Women for Change". In June 2011 she won "The Pride of India

Leadership Award" from the Government of India and the GOPIO for her leadership role in social work, amongst which the SGP project. In May 2012 she won the "Gender Links Award at national level in the "Local Economic Growth" category. She has presented this project in several international forum.