Globally, agriculture is estimated to be the driver for about 80% of land degradation. Reports have shown that between 1.5m and 7m ha of agricultural land are degraded annually, with more than 40% of the severely degraded land in Africa.  The issue of degradation is more severe in Africa than any other continent, as livelihoods in the region are highly dependent on natural resources such as forest and agricultural products. Increasing human populations increase demand for agricultural lands, so clearing of forests and woodland has increased. As the population grows, more fragile, marginal lands are used, such as areas of steep slope and protected areas, exacerbating and hastening degradation. 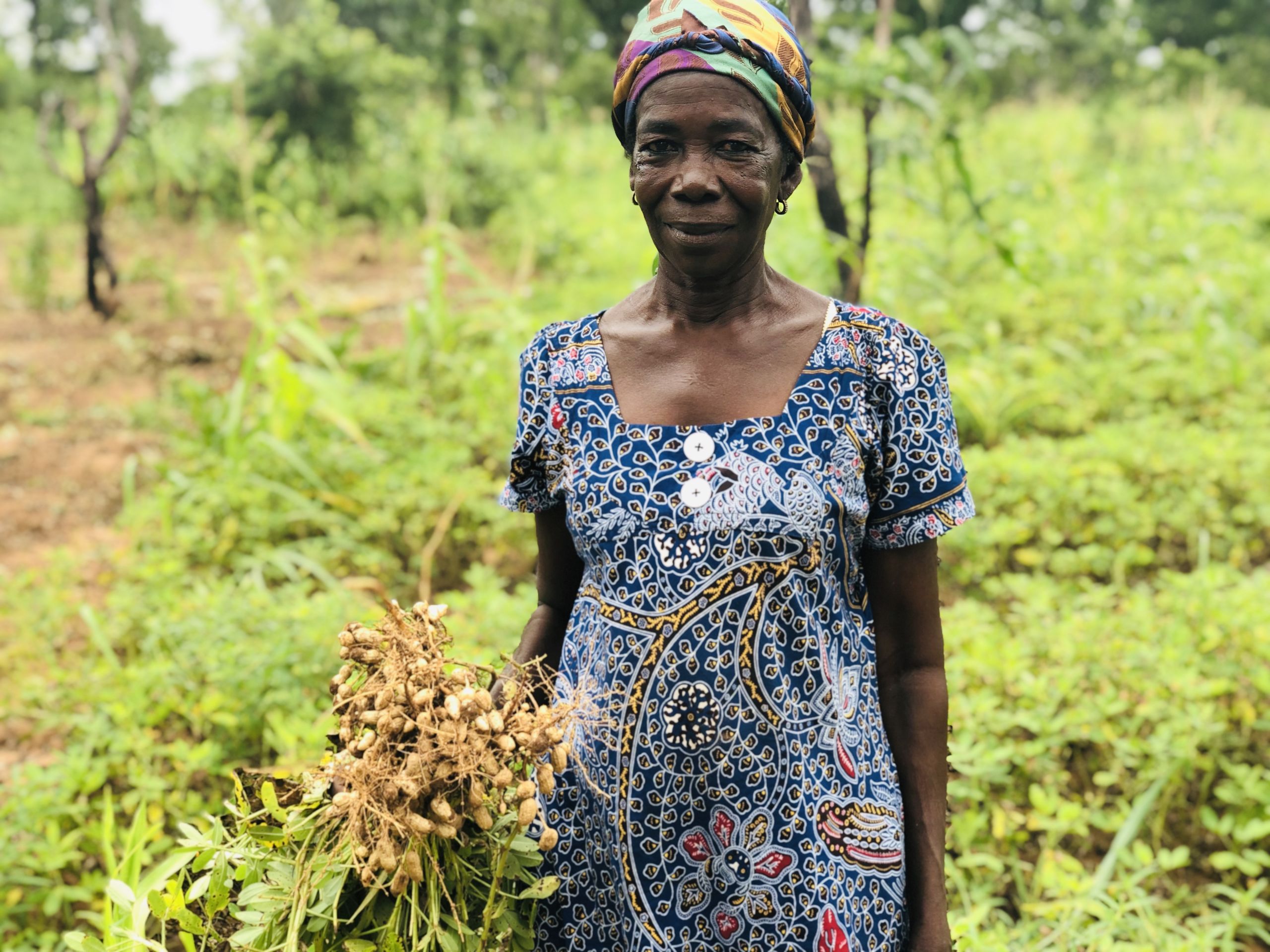 Ghana, renowned for its tropical forests and cocoa farms, currently has 35 per cent of its land at risk of desertification and land degradation. Croplands that were once fertile in the north of Ghana are now unproductive, which has led to decreased incomes; water sources are drying up due to prolonged droughts. With 80% of the country living in rural areas – and with agriculture as their major economic activity - desertification, land degradation, and drought pose growing threats to communities throughout the region.

In Ghana, in the Banda District of the Brong-Ahafo Region, the Dorbor community knows that their future relies on avoiding, minimising, and reversing desertification threats and land degradation. The Dorbor community is one of the major farming communities within the district with a total population of ≈5,250 (2018 estimated). The district is populated predominantly by subsistence farmers involved in the cultivation of cereals and cash crops (primarily cashews) for domestic consumption and – to a lesser extent - for export. Support in their efforts to halt land degradation and sustain their livelihoods has been provided the Small Grants Programme (SGP), funded by the Global Environment Facility and implemented by the United Nations Development Programme.

For the Dorbor community, through the district’s Save Our Environment Foundation, this SGP-supported project, Enhancing community resilience to climate change through Climate Smart Agricultural (CSA) practices and ecological farming, is working to control and reverse further loss of productive land. Indigenous farmers in Dorbor are now promoting sustainable land management practices, such as soil fertility improvement techniques. 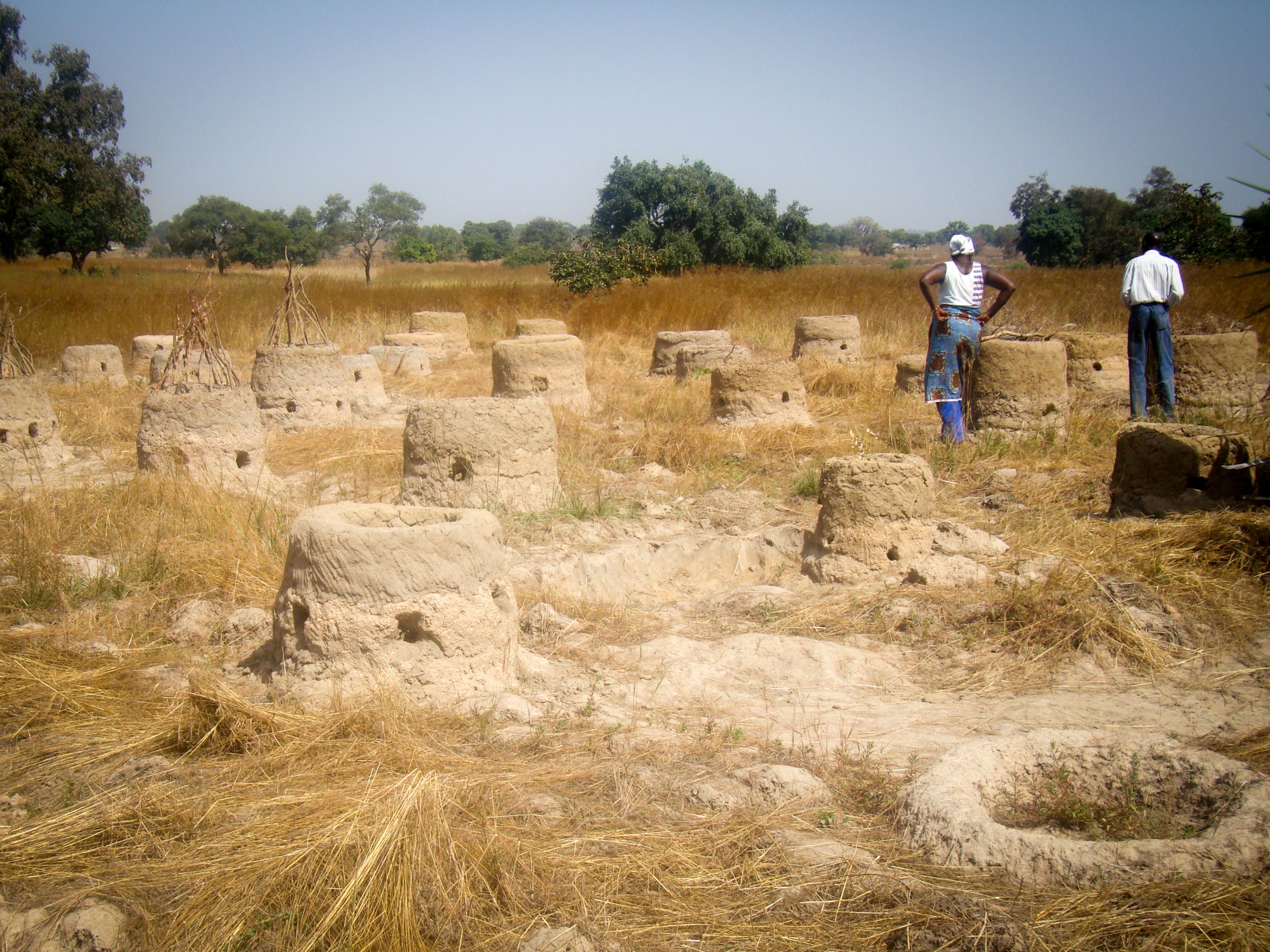 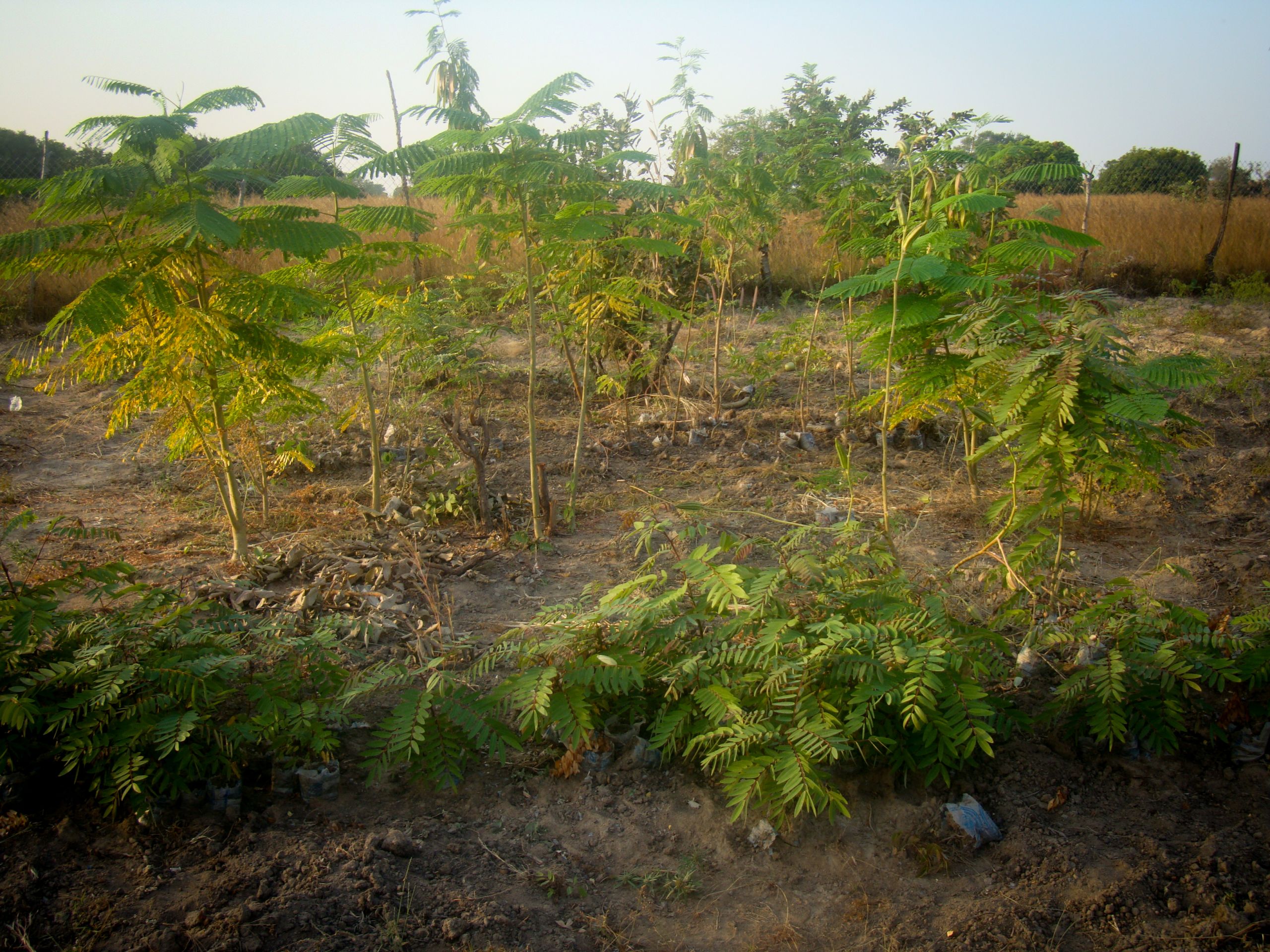 The soil fertility techniques introduced included composting, mulching, crop residue management, and shifting cultivation. Other interventions included the use of crop rotation, household refuse composting, animal/farmyard manure, and to a lesser extent the application of inorganic fertiliser. These strategies were complemented with participatory sustainable land use planning for integrated land and water management, alley cropping and agroforestry, and the use of stone bunds to both improve land productivity and prevent soil erosion.

From the project’s baseline survey, the total priority landscape is 138,740,243ha. Prior to the project’s intervention, surveys of land use indicated that 15.54% of the land area was degraded as of 2015. The landscape suffered among the highest rates of soil nutrient depletion in Ghana, with annual projected losses of 35kg nitrogen, 4kg phosphorous, and 20kg potassium per hectare. The extent of nutrient depletion was widespread, with nitrogen and phosphorus being the most deficient nutrients. Nutrients removed from the soils through crop harvests were not adequately replaced through the use of corresponding amounts of plant nutrients in the form of organic and inorganic fertilisers. 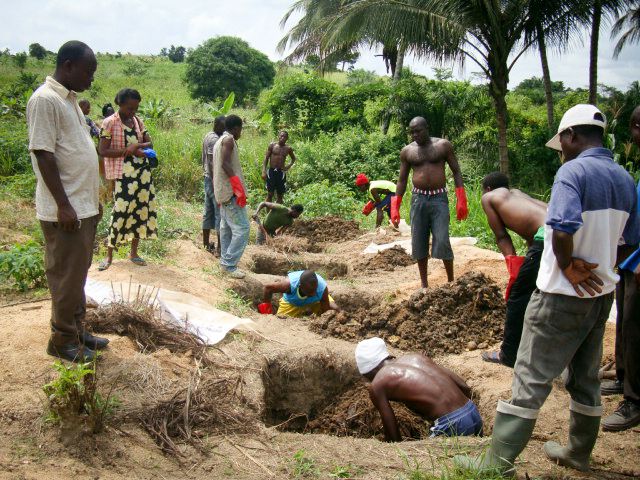 The farmers are also applying integrated pest management in crop production, through processing of bio-chemicals and compost to minimise the use of harmful chemicals (including Persistent Organic Pollutants) in crop cultivation, as well as improved management of solid waste. The project is also enhancing the adaptability and resilience of local farmers to climate change through climate-smart agricultural practices, ecological farming systems, and sustainable livelihood enterprise development.

In partnership with the Dorbor Ecological Farmer Association - an association formed under the project to mobilise local farmers - the Banda District Assembly catalysed the needed political will. The Nafana Traditional Authorities donated land for field demonstrations and mobilised indigenous peoples as project participants. In addition, Ghana’s Ministry of Food and Agriculture provided field trainings, tested the chemical composition of the compost, and supervised field trials. As a result, the project developed the capacities of 185 indigenous farmers in sustainable land management and community waste management. Through the adoption of farming methods that improve land and water management, the project also promoted land use efficiency and improved crop productivity.

Previously, it was estimated that local farmers used up to 62,000kg of chemical fertiliser in crop production annually, and 26,700 litres of chemicals in plant protection and harvesting.

‘Formerly we were using fertiliser and chemicals in our farms. This did not help our land as we continued to add more fertiliser. The quality of the soil fell and consequently [we suffered] low yields. However, with the intervention from SGP we shifted to organic farming using organic compost we make from waste food, animal droppings, and dead wood. Now maize yield from my one acre land is five times more than before. My cashew grows faster. I combine food crop cultivation with cashew and my farm income has doubled. Surprisingly my family and I are looking healthier. We don’t go to the hospital often as we used to in the past because we eat what we produce. Our soil is rejuvenating and I am happy.’ Madam Esther Boakye Yiadom. July, 2018

Madam Esther Boakye Yiadom is a farmer and a mother of 8 children. She is a household head and was among the first 10 women to receive direct training in sustainable land management technologies and improved seedlings support to establish agroforestry farms in 2016. She is an executive member of the Women’s Cooperative Association currently managing the Village Savings and Credit Union in Dorbor. 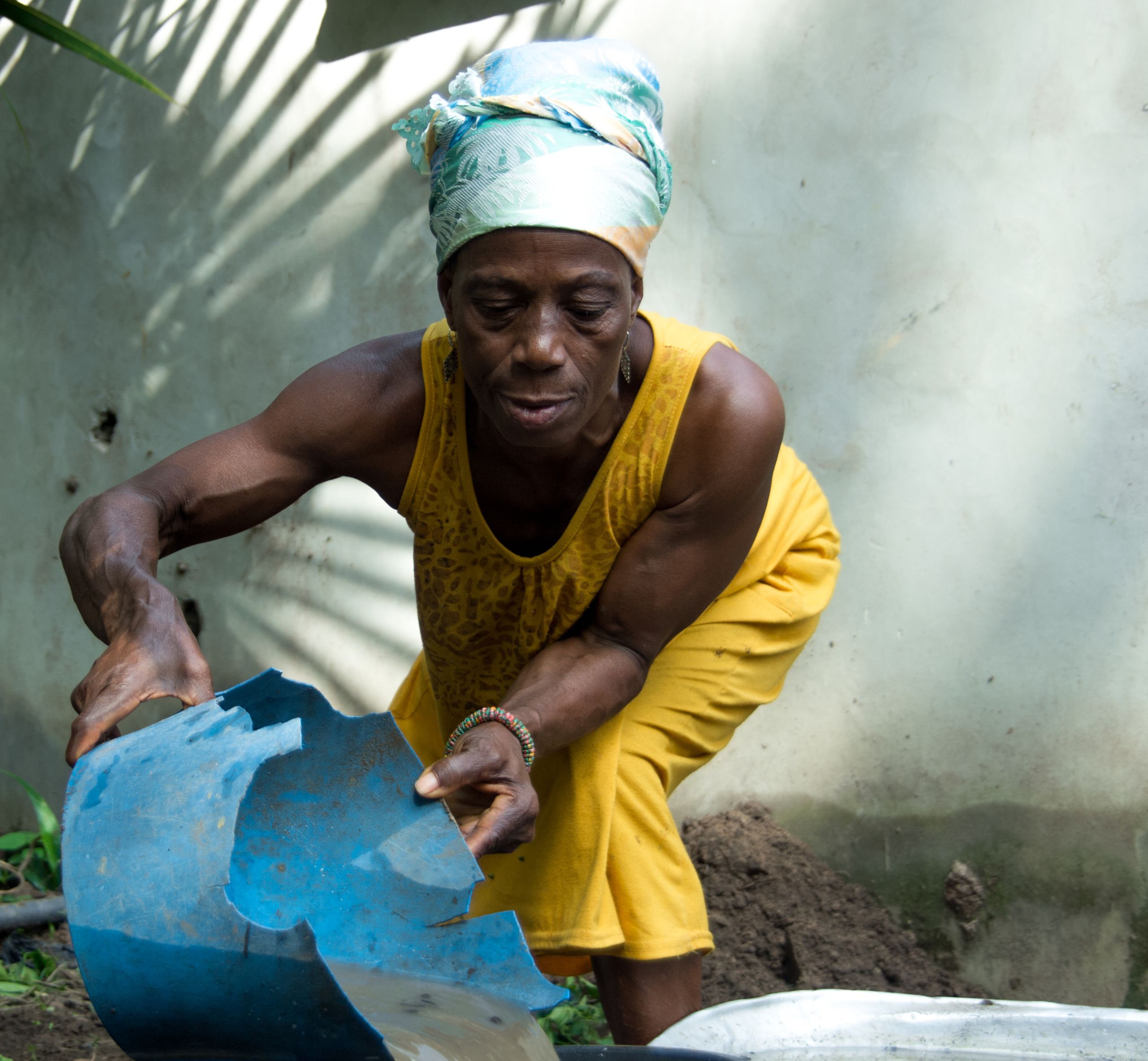 Soils, water bodies, fish and crop products produced within the landscape were becoming more and more acidic as a result of inappropriate and unsustainable use of agro-inputs including fertilisers, insecticides, fungicides and herbicides. In response, the project developed the following solutions: decreasing use of chemical fertilisers and pesticides by building and sustaining the capacities of local farmers in ecological farming, zero tillage, and organic compost preparation methods. The promotion of compost in place of chemical fertilisers on degraded lands, agroforestry, and mixed farms was a hallmark of the project.

The initiative has resulted in multiple and integrated benefits to the indigenous farmers in Dorbor. The project has established 65ha of cashew plantations (smallholdings with improved varieties), 15ha of soya beans, and 15ha of woodlots (a mixture of Cassia Siamea [pheasantwood] and Teak. The soya beans serve as a trap crop / companion plant against striga hermonthica (witchweed) by producing chemicals that stimulate the witchweed seeds to prematurely germinate and quickly die off. As such, the initiative improved the sustainable production and processing capacities of the farmers to advance the value chains (production, processing, and marketing) of both cashew and soya beans. The women now operate in three sub-groups.

The first group is concerned with resource base management, including picking, drying, and processing of cashew nuts for sale. The second group buys the clean nuts from members within the landscape using co-operative funds, and stores them for higher prices. The third group negotiates sales of the nuts directly to commercial buyers including Ghana Nuts. After deducting costs, profits are shared among members of the co-operative. The project further supported 140 households to adopt improved clean-cooking woodstoves for domestic and industrial purposes. Thirty-five households have been engaged in livelihood enterprise development (bee-keeping, piggery, trading in soya beans and cashew seeds, and small ruminant rearing).

‘The project helped me to acquire twelve beehives and I am able to harvest 10 litres of honey from each beehive which I used to fend for myself and take care of my family. Combining beekeeping and farming has increased my income by three times. I have enough to complete the construction of my house which I started ten years ago. I intend to increase the number of my beehives in order to get more harvest’. -Nonga Nie, July 2019 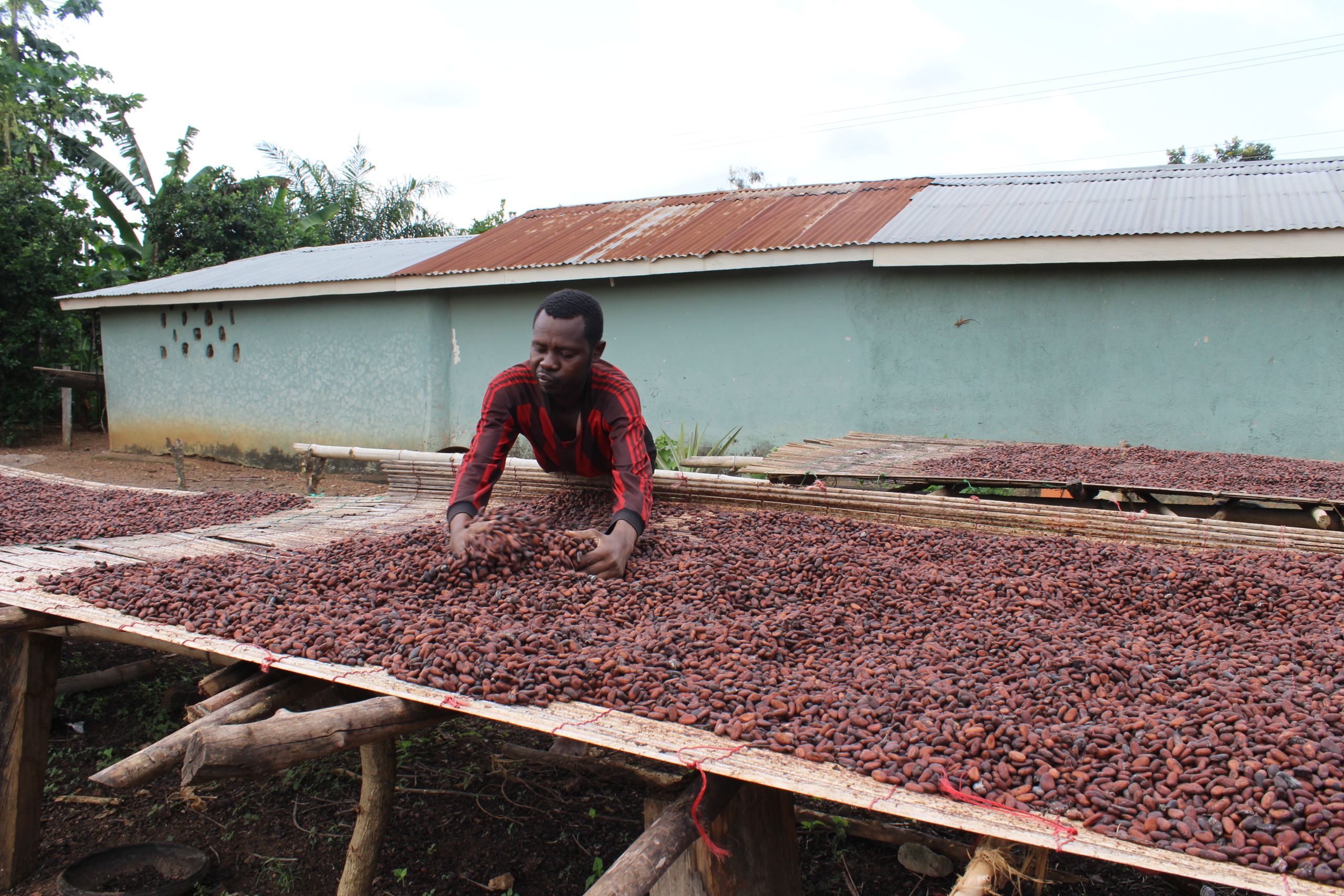 A total of 165 farm families have been introduced to agroforestry, compost preparation, and multi-cropping for increased yield. In sum, 375 individual community members are involved in a village saving and credit scheme, which has now evolved into the Dorbor Cooperative Credit Union. ‘

The trainings on using climate smart agriculture technologies has helped this community a lot. Since I became part of the Women Farmers Association, I harvest six bags of groundnuts from my one acre farm as against two bags previously. This project is indeed our saviour. Our groundnut seeds can withstand drought. Whether it is rainy or sunny, I’m able to harvest a lot to hire labour, take care of my children and home. Today I have additional money to save with the credit union’. -Madam Diana Annane, Dabor, June, 2019

Successful results of the project has been replicated in other landscapes within the district. The village saving and credit scheme has spread to over 12 communities, with membership nearing 1,000 participants. The project model is being replicated by the Ministry of Food and Agriculture.

Inspiring Action
Since 1993 when SGP support in Ghana began, there have been 275 projects undertaken across the country. 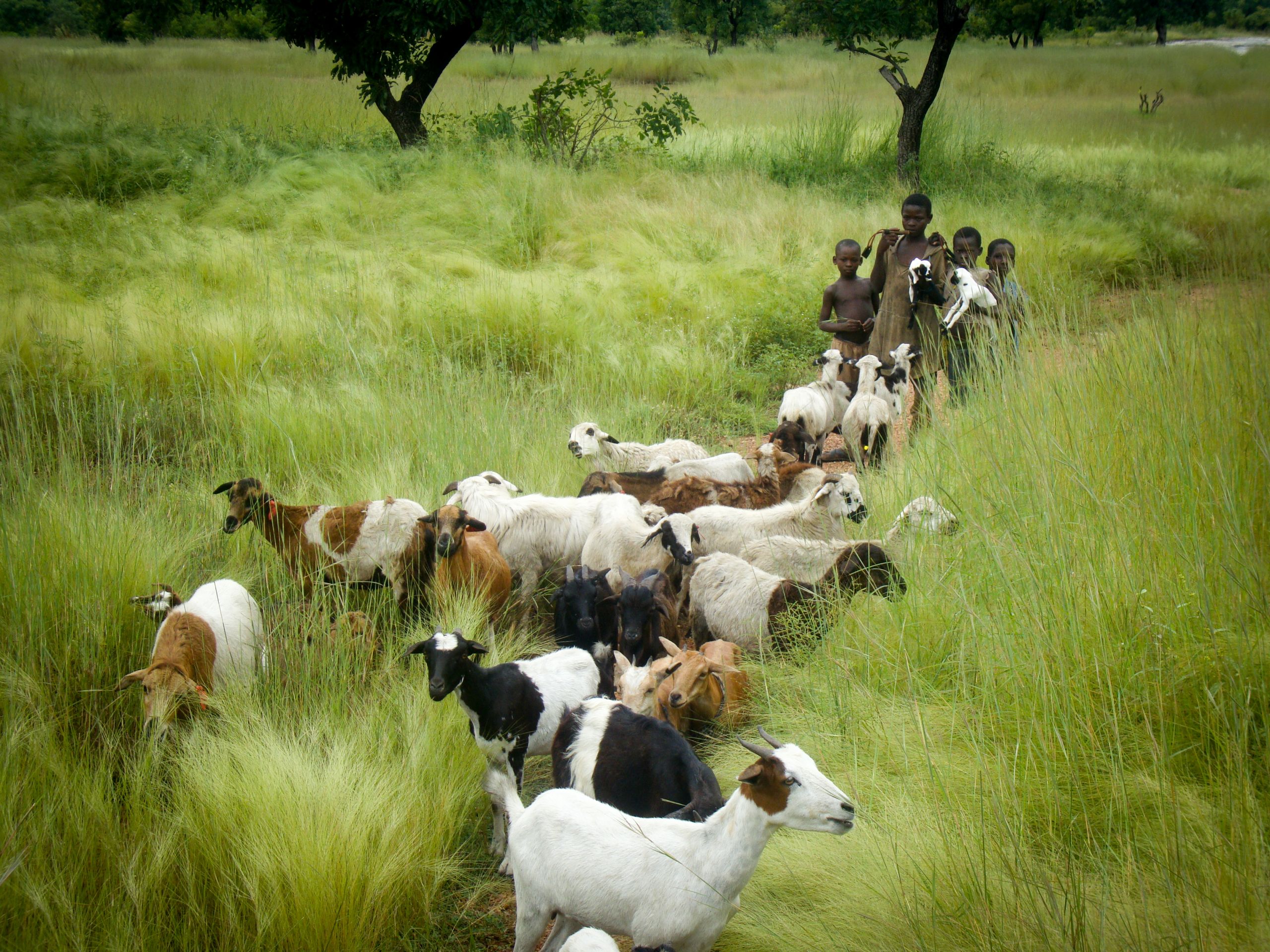 ‘The programme creates an opportunity for local communities to demonstrate ownership of processes and initiatives to address local environmental challenges that usually have direct implications for their livelihoods’. - Mr. Fredua Agyemang, GEF Operational Focal Point, Ministry of Environment, Science and Technology

By providing financial and technical support to projects that conserve the global environment while enhancing people's well-being and livelihoods, SGP demonstrates that targeted community action can maintain the fine balance between human needs and environmental imperatives.