Guatemala means “the land of many trees”, derived from the indigenous Náhuatl word Quauhtlemallan. Forests cover approximately 37% of Guatemala’s mountainous territory, with at least 59% located outside of formally-gazetted protected areas. Due to its rugged terrain, which also connects the Pacific and Caribbean Oceans, Guatemala has the highest rate of species endemism (13%) in Central America.A high proportion of the country’s forests are found in the Petén region in the north of the country, which overlaps with the Maya Biosphere Reserve, and is home to many different Indigenous Peoples and high biocultural diversity.

Emerging in the 1990s from a long and protracted period of civil war, the Guatemala National Biodiversity Strategy and Action Plan (NBSAP) has warned that “forest loss has been accelerating since the 1980s. In 2006, it was estimated that 73,000 hectares of forest are lost annually, which is equivalent to 200 football stadiums daily”, and that the country’s biodiversity is at great risk of degradation through unresolved land conflicts, drug-related violence, and unsustainable pressures from extractive industries.

The Guatemala NBSAP (2012-2022) further notes that the traditional practices and ancestral knowledge associated with the use of biological resources may be irretrievably lost if urgent efforts are not taken to assist indigenous peoples and local communities (IPLCs) to document, protect and transmit their traditional knowledge.

With support from the Government of Germany, through its Federal Ministry of the Environment (BMU), the UNDP-implemented GEF Small Grants Programme (SGP) has been funding a range of projects in Guatemala in support of Indigenous Peoples and Community Conserved Territories and Areas (ICCAs) aimed at the self-strengthening of indigenous peoples’ customary territoriality and food sovereignty.

Videos of the ICCA-GSI projects are available in spanish and with english subtitles .

Located in the Municipality of Santiago Atitlan in the Department of Solola, the Maya TZ Utyjil people live in an oak-pine forest ecosystem close to the Chut Chuk volcano. Owing to a breakdown in traditional controls over land governance stemming from the civil war, unsustainable firewood extraction have led to serious degradation of the customary forests. With support from the Global Support Initiative to ICCAs (ICCA-GSI), the community came together in 2018 to strengthen and restore the self-governance of the Chut Chuk volcano and P’chaj area.  Initiatives are aimed at recovering sustainable forest conservation practices – with great emphasis on the restoring customary labor duties in controlling and mitigating the risks of destructive wildfires during the dry season. As part of the mobilization effort, the Utyjil community have so far been able to reforest 20 hectares of degraded land; appointed 30 “community firefighters” to install firebreaks within 75 hectares of natural forests; and trained 20 women in the production of professional handicrafts from forest resources to expand the communities’ revenues and livelihoods.

Videos of this Maya TZ Utyjil peoples' project are available in spanish and with english subtitles.

In Santa Catarina Ixtahuacan located in the Department of Solola, the Committee Pro-Mantenimianto de Bienes Communales y Titulo Territorial is the Maya K’Iche people’s ancestral organization. Created 100 years ago, the organization seeks to maintain and restore order across the wider territory where persisting land and legal disputes between neighboring communities have continued since the time of colonial rule. Similar to other parts of Guatemala, the social cohesion within the territory has often deteriorated as communities battle both food insecurity and loss of livelihoods. The ICCA-GSI project is aimed at strengthening the Committee Pro-Mantenimianto de Bienes Communales y Titulo Territorial in promoting environmental conservation and socio-economic development in Santa Catarina Ixtahuacan, based on the spirit of collective property titles. 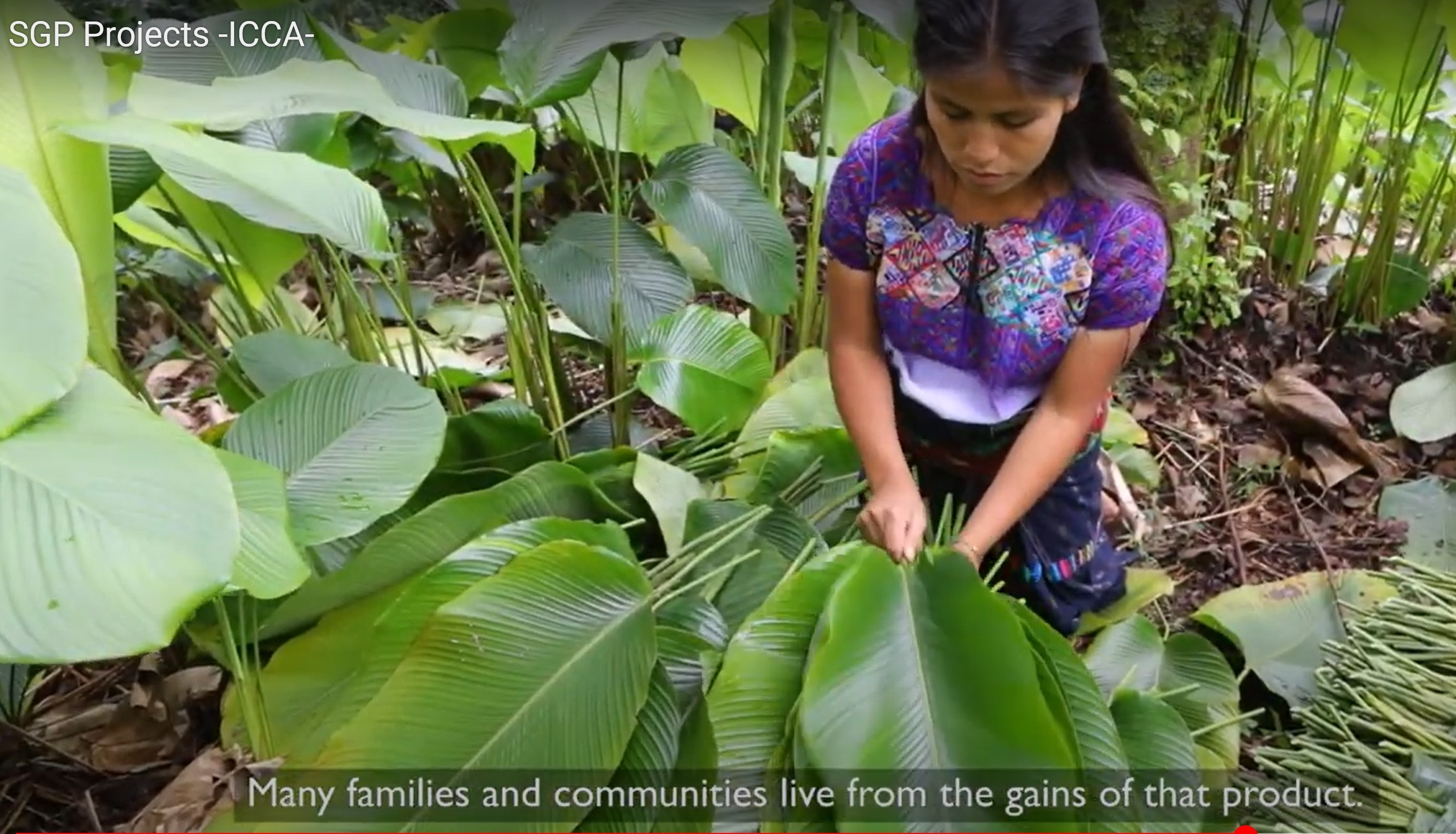 Since the iniation of the ICCA-GSI project, more community representatives have decided to join the local governance committee.  Two commissions have been added for the coordination and territorial management of natural resources. Training sessions in sustainable agroecological practices, combining both traditional knowledge and western science, have also led to the identification of opportunities for agricultural production. In the upstream communities living at 3,000 meters above sea level, where crop production is difficult, the production of Maxan or banana leaf has been one of the main contributors to the local economy. Recognizing an emerging opportunity for banana leaf to be used as an alternative to plastic packaging in urban centres, the project has targeted the increased production of Maxan leaf, strengthening of the value chain, and facilitating access of the product to market. Lima beans have also been identified to grow upstream, diversifying livelihood options. In the case of the downstream communities, living lower down in the watershed, improved agroecological practices have been aimed to increase indigenous-led coffee production.

Videos of this Maya K’Iche peoples' project are available in spanish and with english subtitles.

In the Municipality of La Union located in the Zacapa Department, after decades of struggle, the indigenous Maya Ch'orti’ peoples have been recovering their territories through a series of landmark legal battles with the municipal governments to restore their legal tenure. Thus far, a total of 300,000 hectares of land has been legally recognized and another 200,000 hectares is in the process of recovery. The Ch'orti’ legal landmark case is widely recognized as a source of inspiration for other Indigenous Peoples in Guatemala and marks a shift towards ethno-development --- allowing the Ch'orti’ to return to their roots and promote local employment and growth based on their ethnic identity, ancestral governance, spirituality and capacity to mobilize labor, capital, and other resources to achieve shared goals.

Prior to 2010, the Ch'orti’ had no access to their customary lands and could not grow their own food and products for local markets.  They were highly dependent on wages as farm laborers to grow cash crops, such as coffee, to be harvested and sold to wealthy farmers. Consequently, poverty, malnutrition, weakening of traditional practices and out-migration of indigenous youth had become prevalent. With support from the ICCA-GSI and following the initial success of the legal recognition of their lands, four Maya-Ch'orti’ communities located in the Easter Dry Corridor of Guatemala have been implementing ‘stage two’ of their endogenous ICCA self-strengthening plan through the application of agroecological practices for climate change adaptation and strengthening of territorial governance. The preliminary results of the 2-year project have allowed the Ch'orti’ to increase their food sovereignty through the expansion of vegetable gardens; diversification of diets towards high-nutritional crops; the construction of three water reservoirs to reduce vulnerability to water scarcity; native crop reforestation to protect water recharge zones; application of practices adapted to climate change; complemented by the recovery of medicinal and healing practices.

The experience of the endogenous development strategy of the Maya Ch'orti’ and other indigenous-led conservation initiatives were shared at Indigenous Maloca organized during the III Latin American and Caribbean Congress on Protected Areas III (CAPLAC) held in Lima, Peru on October 2019, and are aimed to be replicated and disseminated across other parts of Guatemala and Central America.

Videos of this Maya Ch'orti’ peoples' project are available in spanish and with english subtitles.