HOW INDIGENOUS WOMEN IN HONDURAS TRANSFORMED THEIR VILLAGE
Print

This arcticle appeared in Proceso Digital, a local newspaper in Honduras (See the original article in Spanish) and in IPS. Below please find the article published in IPS.

Miskito Women Fight on Nature's Side 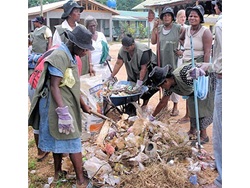 TEGUCIGALPA, Jun 18, 2010 (IPS) - Seven years ago, in the isolated Honduran region of Mosquitia, on the Caribbean coast, a group of women, mostly single mothers, elderly or widowed, overcame their fear and timidity -- thanks in part to a waste recycling project.

They decided to break from the "machismo" of the local culture and organised themselves in the Association of Indigenous Miskito Women on the Atlantic coast (MIMAT - Miskito Miskitu Indian Mairinka Asla Takanka, in the Miskito language).

MIMAT took on the clean-up of the largest lagoon in the area and the streets of the six municipalities that make up eastern Mosquitia, a natural region shared with Nicaragua, with the Honduran part covering 16,630 square kilometres.

They also classify, pack and ship the garbage to a private company that has agreed to purchase the material.

"We began little by little and I'm pleased because we've come a long way, but there's still a long way to go," said MIMAT leader Cendela López Kilton, 58, who has six children and 18 grandchildren.

Between smiles that revealed her white teeth, she told IPS, "We never thought we could be useful to the community and the country. Miskito culture is very difficult; our men believe that women should stay in the home and have children."

"The husbands are angry about the revolution we are creating, because the Miskito woman is no longer submissive. Our Miskito brothers like to hit the women, but now the women defend themselves, they report the men to the authorities, and the men don't like it," she said, letting out a laugh. 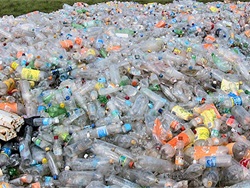 With the support of the Global Environment Facility's Small Grants Programme, of the United Nations Development Programme (UNDP), the women founded MIMAT in 2003. But it was three years before the waste collection and recycling project got started, winning them local and international accolades.

In addition to cultural barriers, they had to overcome the distrust of the local authorities, who saw they were being displaced from some of their responsibilities. Currently, MIMAT is made up of 1,200 women from the six municipalities, and is based in Puerto Lempira, the seat of Mosquitia.

Since 2006, the MIMAT project, which now involves some men, has collected an average of 70 cubic metres of garbage per month.

López is proud of the results and of the collective effort as she talks about how they have kept the Caratasca lagoon clean. Located in the centre of a series of lagoons that surrounds the region, Caratasca measures 60 kilometres long and 12 km wide, part of the coastal wetlands of the Río Plátano Biosphere Reserve, which has been declared heritage of humanity.

"Before, people would throw their garbage in the lagoon, and Puerto Lempiro was ugly, full of garbage, and the pollution affected us. The lagoon is the source of our staple food, which is fish," López explained on a recent visit to the Honduran headquarters of UNDP in Tegucigalpa.

"With the contamination, we were affected by diseases like malaria and diarrhoea, but now that has decreased," she said. 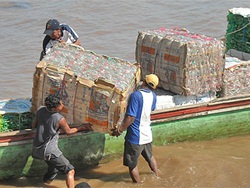 She detailed another important change: the residents of the area no longer burn their garbage in their homes, so there is no more polluting smoke rising from the houses.

"The women of MIMAT have built an incinerator where the garbage goes and we process it. It's great!" she said, with her contagious enthusiasm.