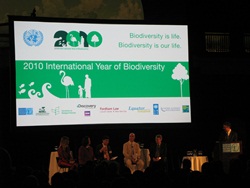 Last February 10, 2010, was the North American Launch of the International Year of Biodiversity at the American Museum of Natural History in New York. A unique event organized by UNDP, the Equator Initiative,Conservation International, Fordham Law, The United Nations Foundation, the Wildlife Conservation Society and the American Museum of Natural History to highlight the role of biodiversity.

Despite the snowstorm that hit New York City that day, over 350 people attended the event that featured statements from UN Secretary-General Ban Ki-moon, a round table discussion with leading biodiversity scientists, and a sneak preview of Life, the Discovery Channel and BBC's follow-up to the critically acclaimed series Planet Earth.

In such important event the work of the Small Grants Programme was highlighted in the Statement of Ban Ki-moon, Secretary-General of the United Nations, which was read in his absence by Olav Kjorven, Director of UNDP's Bureau for Development Policy. Read the statement.

The GEF Small Grants Programme implemented by UNDP has provided over 6,800 small grants for biodiversity projects to local NGOs, community-based organizations and indigenous peoples to safeguard the ecosystems and natural resources on which they depend. Given the high demand from communities and governments around the world, SGP has nearly doubled from 66 countries to 120 countries over the past five years and has about 10 countries in line to join the programme.