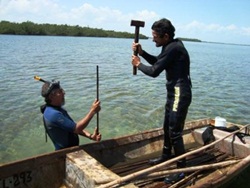 Sponge Farms - New Source of Bounty from the Sea

In a Cuban village thrashed by heavy sea swells and reliant on increasingly depleted fish stocks, the farming of sponges is emerging as a strong alternative for income and development.

The ocean punishes Carahatas every time a hurricane comes through the region. The sea combines with the flow of a nearby river, and the floods the houses with water a meter and a half deep, or more. However, the residents of this Cuban town have an inexplicable love for the sea.

"When I go several days without seeing the ocean, I get upset. If a cyclone comes and tears down the house, as long as one wall is left standing and I can put up as much as a tent, I'm staying here. And there are many more like me," said Neldys Vivero, 50, born and raised in this fishing village on Cuba's northeast coast, in the province of Villa Clara.

In 1985, Hurricane Kate left her parents and many other residents of Carahatas homeless. They were taken to Lutgardita, a community built four kilometers away. "Now I go to see them, and I can't stay more than 20 minutes because it is so small, and it's just not for me," she said in a conversation with Tierramérica.

The "only fisherwoman" in the community until 1985, Machado points out that "there used to be more fish."

Vivero agrees. She began fishing as a child with Machado and her husband. "I remember that between the three of us we would pull up a basket with 40, 50, even 70 pounds (18, 23 and 32 kilograms) of 'pagro' (red porgy). Today, at the most, you'll find five or six pagros in a basket," she said.

Most of the 300 families in Carahatas are aware of some of the causes of the decline in marine life. "The big bottom trawlers finish off the young. We never used the trawler nets. We fished with baskets or with hook and line," Machado said.

According to Vivero, the trawler technique - and its negative impacts on undersea vegetation and fish stocks - was introduced in the area in the 1970s. "We didn't have a clear notion of the harm it was causing."

A natural community leader and re-elected many times as citizen representative for one of the two administrative districts in the area, Vivero says that most local fisherfolk now recognize how aggressive trawling is, although it is currently regulated, and continues being used in deeper waters.

When the fish are running, this method is used to catch the species that gather in canals and in seaweed to migrate in schools to the sites where they deposit their eggs. The result is that the fish are caught before they can reproduce, thus compromising future stocks.

But that isn't the only challenge in Carahatas, which neighbors Las Picúas-Cayo Cristo Wildlife Refuge, a protected area of 40,250 marine hectares and 15,720 land hectares.

The liquid and solid waste that the population dumps along the coast, as well as deforestation, also affect the marine habitat and are among the matters to be dealt with in a plan outlined by a project financed by the Small Grants Program of the Global Environment Facility.

Channeled through the United Nations Development Program (UNDP), the project for the "Alternative Use of Natural Resources in the Coastal Community of Carahatas" proposes, among other aims, the cultivation of sea sponges as an employment option for fisherfolk committed to abandoning trawler fishing.

Felisberto Rodríguez, 45, the first convinced of the benefits of the alternative, explained that the Carahatas fishers never thought that the sponge, a sea animal, could be cultivated, but now that they have seen the initial results they are only waiting for the farms to be expanded so they can join the initiative.

Rodríguez worked on the experimental cultivation of two sea hectares in the effort overseen by Ángel Quirós, an expert from the marine ecology group of the government's Center for Environmental Studies and Services (CESAM) of Villa Clara, 276 kilometers from Havana.

The plan now is to cultivate 12 hectares, which in one year are expected to yield one ton of sponges and sell for more than 15,000 dollars on the international market. According to calculations by Quirós, the area has the potential for about 15 sponge farms, each run by two people.

"I already have planted three areas of more than 100 square meters each. The sea itself provides the 'seed'," said Rodríguez. "Each sponge can be divided into 30 pieces, and that has to be done in the water. I like to be in the ocean depths. Sponge growth is slow, but when the harvests begin, everyone will see the result."

Quirós defends this unique crop as a sustainable, inexpensive and environmentally friendly option because it does not create pollution, it doesn't alter the habitat and does not produce waste - nor does it suffer the effects of climate change. Furthermore, he assures that these invertebrates have a secure market, primarily in Europe.

"The sponges remain submerged even if the sea level decreases or increases. Because they grow in areas of stronger water circulation, they aren't affected by fluctuations in temperature. In addition, the farms create refuges for small organisms and for the young of larger animals," said the marine biologist.

Neldys Vivero admits that in the beginning she didn't see the potential of the idea. Now she is convinced that the Carahatas coast "is very appropriate, with many good sites for this crop," which will provide employment for many women and men in this small town.

"Interest in it will increase as the commercialization begins and expands," she said. With stable production, the industrial process of the sea sponge would turn into a good source of jobs for women, according to Vivero. Here, 67 percent of the women work in their homes, and of those, "35 or 36 percent are asking for employment," she said.

The initiative, coordinated by María Elena Perdomo, of CESAM, has included workshops on environmental education, reforestation, and proposals for reducing contaminating waste, such as creating a dump outside the town.

It also produced a guide for growing sea sponges and a manual of best environmental practices in coastal zones.

"We were able to convince people of the importance of taking care of resources and how to use them in a better way. They also gave us a lot of information... Now the people feel ownership for what they are doing," said Vivero. (END/2009)