NEPAL - MY FAMILY WILL NOT HAVE TO DIE OF HUNGER
Print 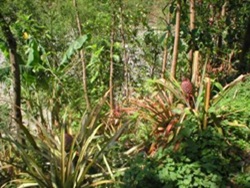 The prince turned into a pauper overnight when Man Bahadur Praja's 1.3 hectares of cultivable land in Makawanpur was washed away by landslide and flood in 2002. With his productive land gone, he was compelled to rely on his khoria land—

cultivation in a steep land.Usually, maize, black gram, mustard and horse gram are grown in the khoriya and the yield is really low, hardly sufficient to survive.

Makawanpur, a typical mid hill district occupies the land area of 242,600 ha with less than 7% cultivable land. Remaining 93% land are under serious threat and the researchers often blame deforestation, slash and burn practice, other unsustainable land use and flood and landslide as elements that threaten the livelihood of the local people.

Earlier, the agriculture period was shorter followed by a long forestry period(which is known as fallow period). Whatever vegetation grew during the fallow period was slashed and burnt that provided nutrients to the agriculture crop. As the need rose for more crops, people started cultivating in the gap of 3 to 4 months followed by a shorter fallow period with frequent slash and burn. As a result, this steep slope ranging from 30-60 degrees started suffering from soil erosion and landslide.

After terrace improvements and with active support from the community, the project decided to introduce agro-forestry by planting banana, pineapple and other fodder trees in the sloping land.

"Crop identification is a very challenging task while initiating the project", says Mr Khop Narayan Shrestha, co-ordinator of the project."It was really difficult to change the traditional agricultural practice of the local people as the risk factor is really high. If the selected crop failed, the farmers would not even get what they were getting from the khoriya land," adds Mr. Shrestha.

The farmers now have the experience of earning upto Rs. 3 million by planting over 600,000 saplings of banana, pineapple and fodder trees. The income ranges from Rs. 1,000 to 45,000 per household.

The production of pineapple and banana has provided the households especially women and children, the nutritional supplementary diet. With deep satisfaction, Mr Man Bahadur Praja says , "My family will not have to die of hunger".