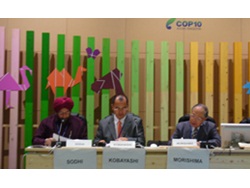 Drawing lessons from field activities across the region, Masanori Kobayashi, IGES, emphasized the importance of linking biodiversity with income generation. This event highlighted the top 10 reasons for the creation of a global network of marine reserves.

Noting that the oceans are in crisis and that less than 1% of the word's oceans are fully protected, Richard Page, Greenpeace International, explained that the report, "Emergency Oceans Rescue Plan: Implementing the Marine Reserves Roadmap to Recovery" focuses on priority areas within country exclusive economic zones (EEZs) and in the high seas where immediate action should be taken to create networks of marine reserves.

He then outlined the top 10 reasons for the creation of a worldwide network of marine reserves, noting that it would: help the oceans withstand the impacts of climate change; benefit science; buffer declining tuna stocks; improve quality of human life around the globe; have fiscal benefits; fulfill CBD members' pledge to establish such a network by 2012; and ensure a bountiful ocean for the future. He also emphasized that creating this network is possible.

Sophia Tsenikli, Greenpeace, Greece, said that if 20-30% of oceans are protected, US$70-80 billion can be recovered from restored fisheries catch.

This event explored means of supporting innovative policy measures and field actions for biodiversity conservation in the Asia-Pacific region. It also examined ways of scaling up such activities and connecting them to macropolicy development.

Akio Morishima, Institute for Global Environmental Strategies (IGES), drew attention to the final report of the Asia-Pacific Forum for Environment and Development, "APFED II," which was published in September 2010. He said the report summarizes policy dialogues and knowledge initiatives and showcases programmes that contribute to sustainable development in the region.

Prabhjot Sodhi, GEF/UNDP Small Grants Programme, CEE described the Programme's work in India. He explained that small grants are a window which builds mutual respect and trust with communities in the unreached vulnerable areas. Encourages community ownerships through co financing, including from the government, such that the grants became more than "one-off" inputs of financing. Sodhi from GEF/UNDP, CEE, highlighted key factors for scaling up local successes, including the need to train the locals to take the ownerships in a range of areas through kinships based local institutions. He also added how the external facilitators add value and also help establish multi stakeholder alliances between governments, private sector, international agencies, research institutes and nongovernmental organizations.

Lorenzo Daguitan, Tebtebba, described an initiative to develop an ecosystems-based approach to land-use management with an indigenous community in Ifugao province, the Philippines. Noting that traditional knowledge systems have been eroded, she said the project hopes to develop indicators of wellbeing within the indigenous population. Chee Yoke Ling, Third World Network, stressed the importance of a rights-based approach for preserving traditional knowledge systems. She suggested that trade policies imported from elsewhere pose the biggest threat to the holistic approaches to nature that exist in much of Asia and the Pacific.

Rodrigo Fuentes, Asean Centre for Biodiversity, stated that there are pockets of success in developing payment for ecosystem services systems in the region, adding that many exchanges are community- rather than market-based.

He said local governments play an important role in scaling up community successes by acting as a link between communities and national governments. Fuentes described how Malaysia's Ministry of Environment has provided guidance for local and national planners on how they can mainstream biodiversity into their activities.

Participants discussed, inter alia, the role of governments in helping a wide variety of stakeholders engage.