Launched in 1992, the GEF Small Grants Programme supports activities of non-governmental and community-based organizations in developing countries towards climate change abatement, conservation of biodiversity, protection of international waters, reduction of the impact of persistent organic pollutants and prevention of land degradation while generating sustainable livelihoods.

To date, SGP has presence in 122 countries and has supported more than 13,000 community-based projects worldwide in all GEF focal areas. The maximum grant amount per project is US$50,000; however the average is US$25,000. Grants are channeled directly to CBOs and NGOs.

During this Fifth Operational Phase, SGP will start the programme in Russia, opening up opportunities to local communities for their environmental projects. An example of the impact that the programme could have for Russia can be appreciated in the following examples of projects that have been successfully implemented in Romania. 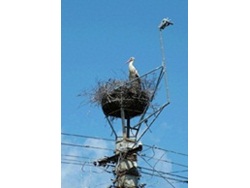 Dumbravioara – the Village of Storks

Dumbravioara village (near Targu Mures) hosts 14 white stork nests that have been turned into a new source of income for the local population by the Milvus Group Association as implementer of an SGP project. The first stork museum in Romania was created which includes a small wooden scale-model of the village with the location of the nests throughout the community. A web surveillance camera that was mounted at one of the nests (photo) allows visitors to watch the “storks at home” in real time on a computer at the stork museum. Once internet was available, this later became accessible to the public at large. A stork festival became traditional as established through the project in 2005. An innovative solution to isolate medium-voltage power poles hosting white stork nests was developed for the first time in Romania by Milvus with the electricity company that implemented it in Dumbravioara at their own cost.

Milvus is currently expanding its area of intervention by implementing another GEF SGP project to develop a management plan for the Lernut and Cipau fishponds protected area and to monitor the effective implementation of the biodiversity conservation actions, as well as mitigate the conflicts generated by the inappropriate land use techniques in the protected area. 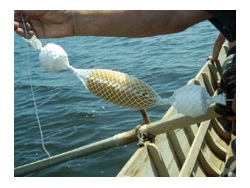 Positioned at the top of the food chain in the Black Sea ecosystem, dolphins have been particularly vulnerable to a wide range of threats resulting from the human activities carried out at sea. Mare Nostrum made a significant contribution to reducing the by-catch of dolphins by distributing acoustic deterrent devices to fishing companies to be used at the fishing nets (photo), and by working with the fishermen communities to prevent accidental catches. 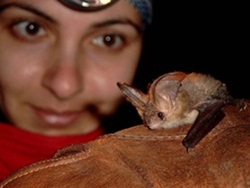 The Romanian Association for Bats Protection (APLR) implemented a project designed to enhance the protection of underground habitats in five key limestone caves in Eastern Carpathians and Apuseni Mountains. The project inventoried the caves, described them as sites of community importance (Natura 2000) and involved local volunteers in bat protection activities and educational camps, increasing public participation in bat conservation actions. To fight superstition and fear of bats, the young generation from the communities living near the caves was involved in training camps and in the organization of the European Bat Night which since then became a tradition.

APLR is currently implementing a new project concerned in bat conservation in anthropic habitats by reducing human impacts to determine the impact of public lighting on foraging activity of bats, to measure the existing relationships between human land usage and various types of habitats used by bats, and to raise public awareness concerning biodiversity conservation, energy efficiency and sustainable land management.