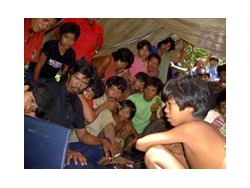 The GEF Small Grants Programme is joining in the celebration of the International Year of Forests as it recognizes the importance of raising awareness on the value of the forests and the ecosystems it preserves. In fact, SGP believes that communities play a fundamental role in protecting, restoring and influencing local and national policies on forests and therefore it has a growing portfolio of community-based projects in this area.

Since 1992, the GEF small Grants Programme has supported over 2,900 projects related to the protection and restoration of forests. Given that SGP is a firm believer of the importance of strengthening the efforts at grassroots to conserve and sustainably manage forests, the programme has supported community-based projects that protect over 13,000,000 hectares of forests from human and non human impacts, and has helped communities restore over 1,700,000 hectares of degraded forest worldwide.

An example of the approach of SGP is the project "The Living Fence and the Jungle School: Protecting the Orang Rimba and their forest Home" from SGP Indonesia. This project supported the Orang Rimba (People of the Jungle), an indigenous community that resides in a forest in the Bukit Dua Belas National Park in Sumatra in their goal of strengthening the capacity of the Orang Rimba to protect the forest and conserve important biodiversity. Given their low level of literacy the community used participatory video techniques to create their project proposal, as well as to monitor the project. This flexible approach allowed this indigenous community to implement the project with successful results in the protection of Sumatran low land forests and the last remaining home forest of the Orang Rimba Community. The project also contributed to protect the habitats of endangered species such us the Jambi giant trees (Dipterocarpus sp.), the Tapir (Tapirus indicus), the Hornbill bird (Buceros virgil) and the Siamang Gibbon (Hylobates agilis). 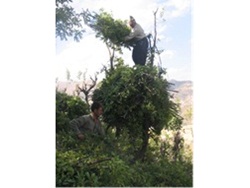 Another example of the work of SGP with communities is the case of SGP Iran with its project "Galazani: A Traditional Forest Management System ". This project was implemented in the Havareh Khol village near the town of Baneh in the northern part of Zagros Mountain Range in the west of Iran. This area consists of 347 ha of forest with valuable species of Oak, 120 ha of rangelands, 77ha of farm fields, 3 ha residential areas and 30 hectares of destroyed forests.

Traditionally, wood and fodder were provided through an indigenous method called "Galazani" or in technical terms, pollarding, which means trimming the newly born branches of trees up and down the stem and stored to be used in winter. "Galazani" was not only a way to collect needed fodder and wood but also an indigenous forest management skill. Upon nationalization of forests in 1963, private exploitation of forests including cutting wood for fuel and branches for fodder were banned by government and authorities.

However, this project served to compile, register and improve "Galazani" as an efficient traditional method of forest management. This project was supported by Faculty of Natural Resources in Tehran University, Department of Forestry in Kurdistan province. Since the method was the same as traditional methods applied by local inhabitants, they played a significant role in both providing the traditional know how and implementing techniques.

The participation of indigenous people resulted in outstanding achievements during the first year, leading to academic interest, followed by changes in the National Forestry Policies after successful implementation. In 2004, the project received the award of best National Project on Natural Resources. 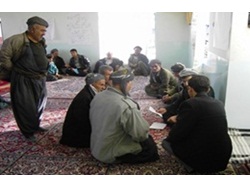 After its success, another SGP project was executed in the neighboring area, Armardeh, to make sure the improved "Galazani" technique will be a primary forest management method in the region, ensuring survival of traditional practices.

Conscious of the role of future generations in preserving forests, SGP partnered with the Secretariat of the Convention on Biological Diversity in the Green Wave Campaign, a global biodiversity campaign to educate children and youth about biodiversity. Each year, The Green Wave will contribute to worldwide celebrations of the International Day for Biological Diversity (IDB) where participating schools, will help students plant locally adapted and important tree species in or near their schoolyard. The GEF Small Grants Programme has been a key partner of this initiative and has piloted the Green Wave campaign in countries like Belize, Egypt, Tunisia, Eritrea, Mauritius, Chile, Nicaragua, and Trinidad and Tobago in an effort to raise public awareness on the value of forests and the social, economic and environmental cost of losing them.

For its Fifth operational Phase, SGP strategy on this portfolio will focus on undertaking activities that reduce pressures on forests and generate sustainable flows of forest ecosystems services; and in supporting policies and activities that strengthen the enabling environment to reduce green house gases resulting from deforestation and degradation of forest with linkages to transformative activities that support multi-sectoral investments. These activities will look at how communities can further be engaged to transform 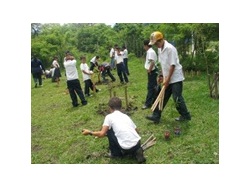 their landscapes by participating in protective and productive forest management activities for improved socio-economic livelihoods. The decisions after the Rio convention and subsequent earth negotiations, systematically call for the inclusion of forestry in investment programmes even at community level. SGP, along with other institutions, will address this need by acting as a catalyst for the REDD + mechanisms and will incentivize the involvement of traditional and local communities in the process.

Older Story
The GEF Small Grants Programme to start in Russia during its Fifth Operational Phase
Newer Story
My Island - My Community: A Regional Awareness on the Effects of Climate Change in the Caribbean