Plastics constitute a growing threat to our environment - and in turn, human well-being - affecting the world’s freshwater systems and marine resources in particular, as well as terrestrial biodiversity and public health.  In India, where plastic use is rising, most cities and towns do not have an integrated solid waste management system.This means that very little plastic waste is properly collected or disposed of, resulting in a massive waste-management challenge as cities continue to grow. But in the central Indian state of Madhya Pradesh, waste collectors in two cities, Bhopal and Indore, are turning plastic waste into roads, as well as income for women.

In the city of Indore, home to almost 2 million people, 800-900 metric tonnes of waste are generated every day, 14% of which is plastic – enough to fill 5-7 shipping containers. Urban waste management is one of the top priorities of the Government of India and local and affordable innovations in this sector are highly valued.

In this context the ‘circular economy’ concept - an economic system intended to eliminate waste and the ever-increasing use of resources - offers a pathway to more sustainable resource management. It means reduced production, use, and disposal of plastics. Through the single powerful objective of reduce > reuse > recycle, waste collectors in Bhopal and Indore are working to prevent cast-off plastic from entering the environment in the first place. 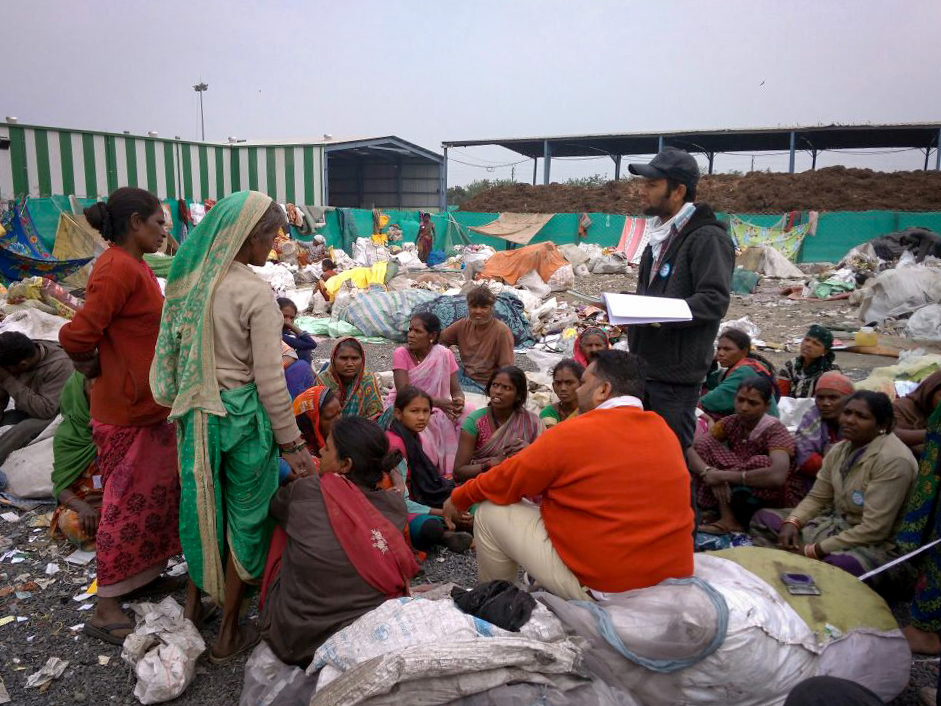 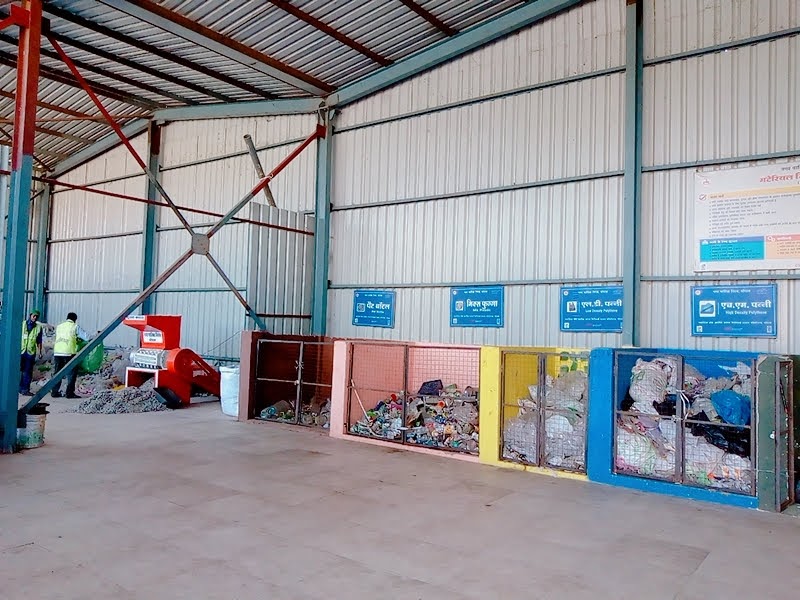 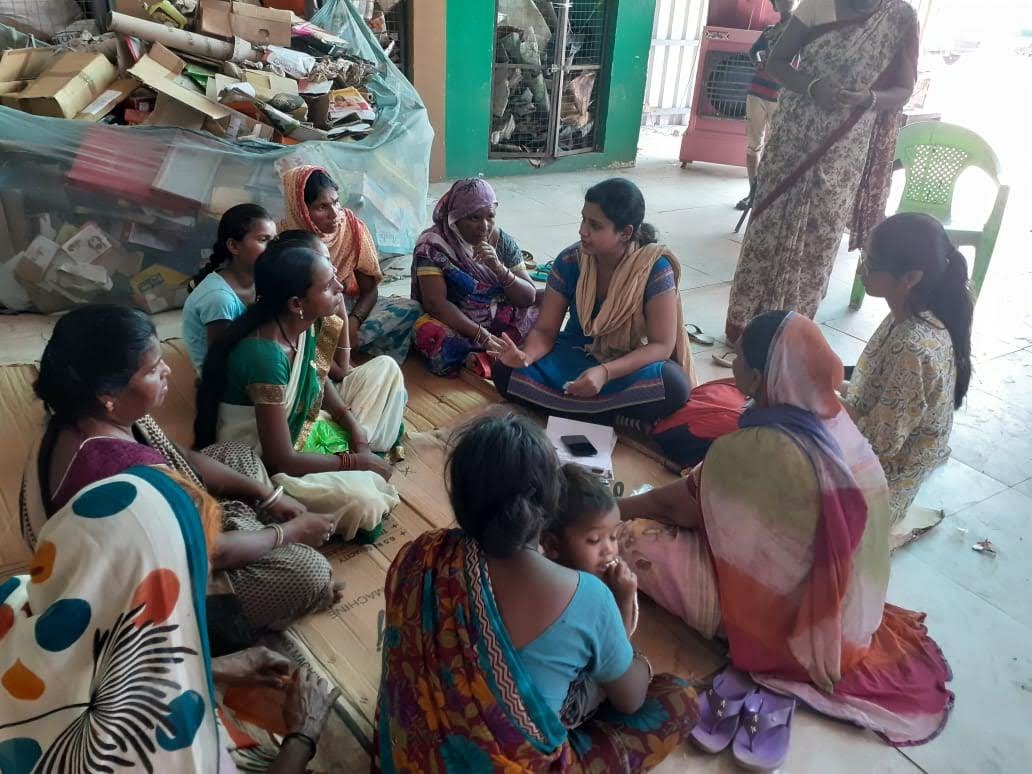 With the support of the Global Environment Facility's (GEF) Small Grants Programme (SGP), implemented by the United Nations Development Programme, a local NGO in India is working with municipal governments to develop a new system for plastic waste recycling. The NGO, Sarthak Samudayik Vikas Avan Jan Kalyan Sanstha (SSVAJKS), has been working with waste collectors in Bhopal since 2008 to streamline plastic waste collection and sales to recyclers.

SSVAJKS initially developed a sustainable integrated waste management system for five wards in the city of Bhopal, which served as a model for the creation of a plastic waste management policy at the state level in 2011. This model has now been replicated in all states across India (and even onwards to Bangladesh). This innovative model, now known as the ‘Bhopal model’, recycles and processes plastic and reuses it in the construction of roads, benefiting over two million people.

‘Ragpickers’ – the local term for such waste collectors - are individuals whose livelihood is picking over refuse in landfill sites or elsewhere to salvage goods and materials for recycling or reuse. They are mostly poor, illiterate, female, and come from socially marginalised castes, rendering them highly vulnerable. Waste-pickers collect and then hand over the plastic waste to collection centres run by the municipal corporation. The plastic waste is scanned and segregated, and most single-use plastics — which comprise half of all the plastic in this waste stream — are shredded and baled.

These bales are then taken for co-processing at cement kilns, or used to build roads. It’s a win-win: not only do the waste-collectors - one of the more vulnerable cohorts in Indian society – double their wages, something useful is done with the plastic litter. In 2010, in close collaboration with the municipal corporations of Bhopal and the Municipal Commissioner, SGP provided an initial grant that enabled SSVAJKS to conduct focussed interventions in five wards of Bhopal Municipal Corporation. Part of the interventions included organising waste-pickers into self-help groups (SHGs). In 2014, SSVAJKS was awarded another SGP grant to mobilise more than 2,000 unorganised waste-pickers in 70 wards of Bhopal Municipal Corporation. 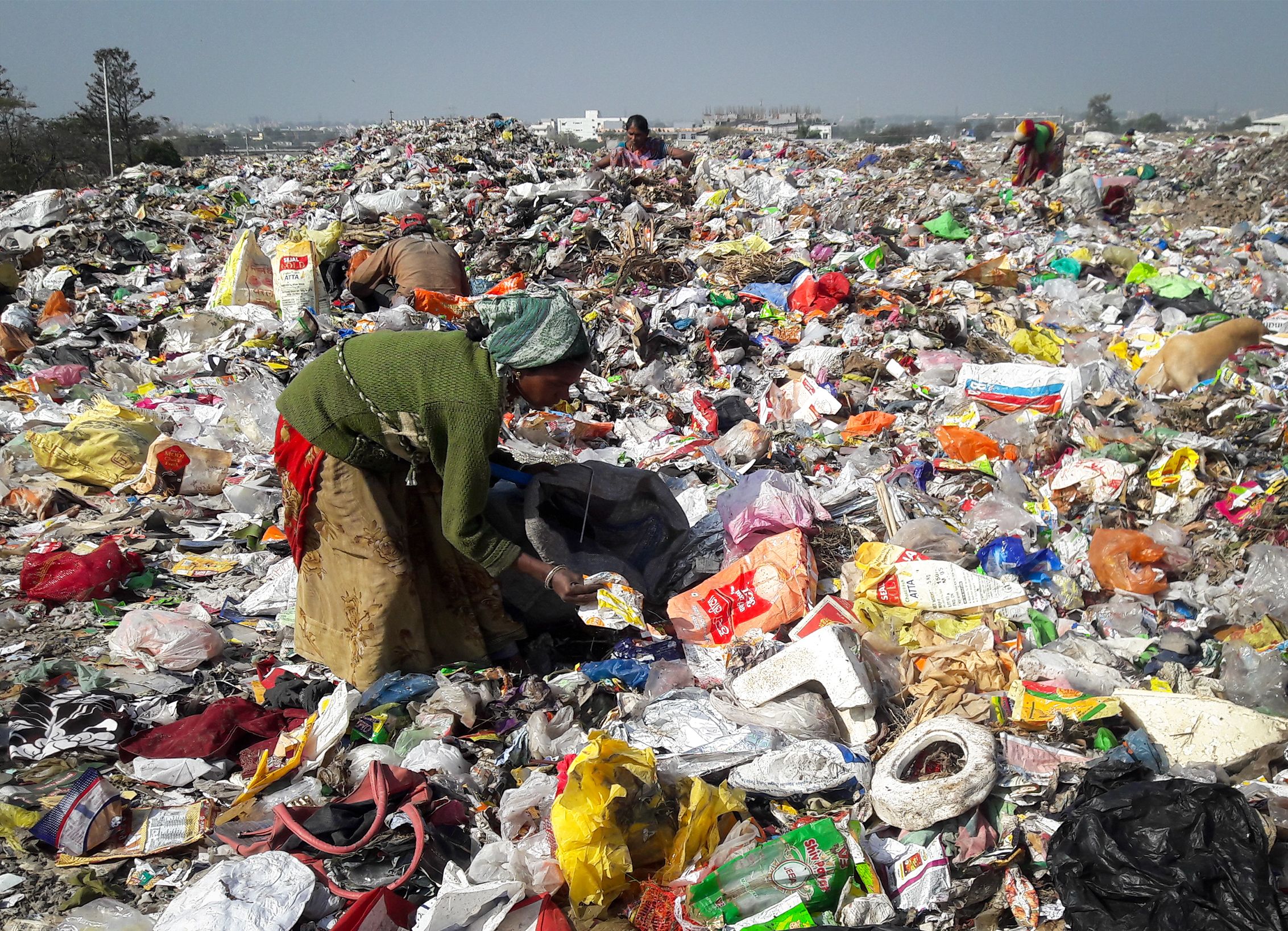 A crucial element of the project’s success was SSVAJKS’ partnership with urban municipal governments and local industries. Through the self-help groups, the waste collectors - many of whom are socially marginalised and illiterate women - have been organised and trained in waste collection and recycling activities.

The majority of these waste collectors have been provided with municipal identity cards and uniforms through this project. Improving their livelihoods and protecting the environment, these women contribute to the approximately 10 tonnes of plastic waste that are collected at five recovery centres in Bhopal every day, and then recycled by cement industries in and around the city.

‘I’ve been sorting waste for 15 years. Polythene bags, glass, plastic and more: we pick up all of this stuff of the roads. We used to collect dirty plastic bags from the street and the plastic traders would offer us less money per kilogram because the bags were dirty. And people would stop us from collecting trash and tell us to leave their colony. Now that we work with the municipality, no one tells us to stop. In fact, they now ask us to come and pick up waste’ - Meera Gosai, waste collector, 1 of 3,200 waste collectors involved in segregating plastic waste in Indore, India.

By the end of 2016, 646 waste-pickers in Bhopal were organised into 42 self-help groups. More than 60 per cent are women, who earn a daily living from selling the plastic waste. In total, 40 members from the women’s self-help groups have also been trained in making bags out of used polythene, which are sold in exhibitions across India. The success of the Bhopal work also led to the establishment of a pilot plastic recovery centre in Indore. As a result, ≈3,500 waste collectors have been organised into self-help groups in Indore. Additionally, given the occupational hazards involved, SSVAJKS also conducted regular health camps, and over 850 waste collectors are now enrolled in health insurance schemes. 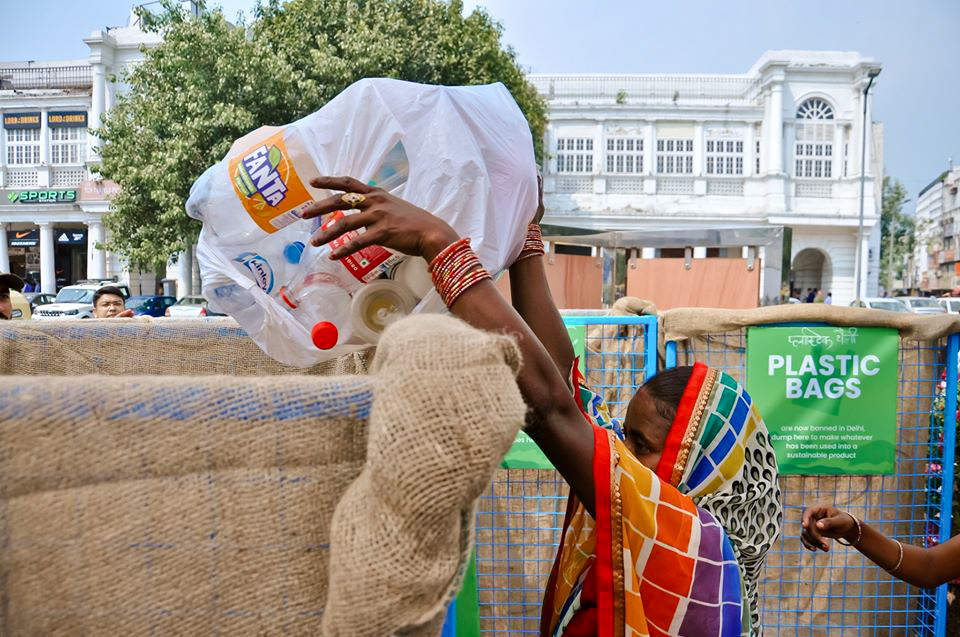 From Waste Collection to Waste Recovery

Poorly-regulated incineration poses considerable threats to human health and the environment. Globally, in this year alone, researchers estimate that the production and incineration of plastic will pump more than 850 million tonnes of greenhouse gases into the atmosphere. By 2050, those emissions could rise to 2.8 billion tonnes. Thanks to the support of this expanded waste collection, these waste collectors have helped process over 4,200 metric tonnes of plastic bags in the city and saved 12,000 tonnes worth of CO2 emissions. 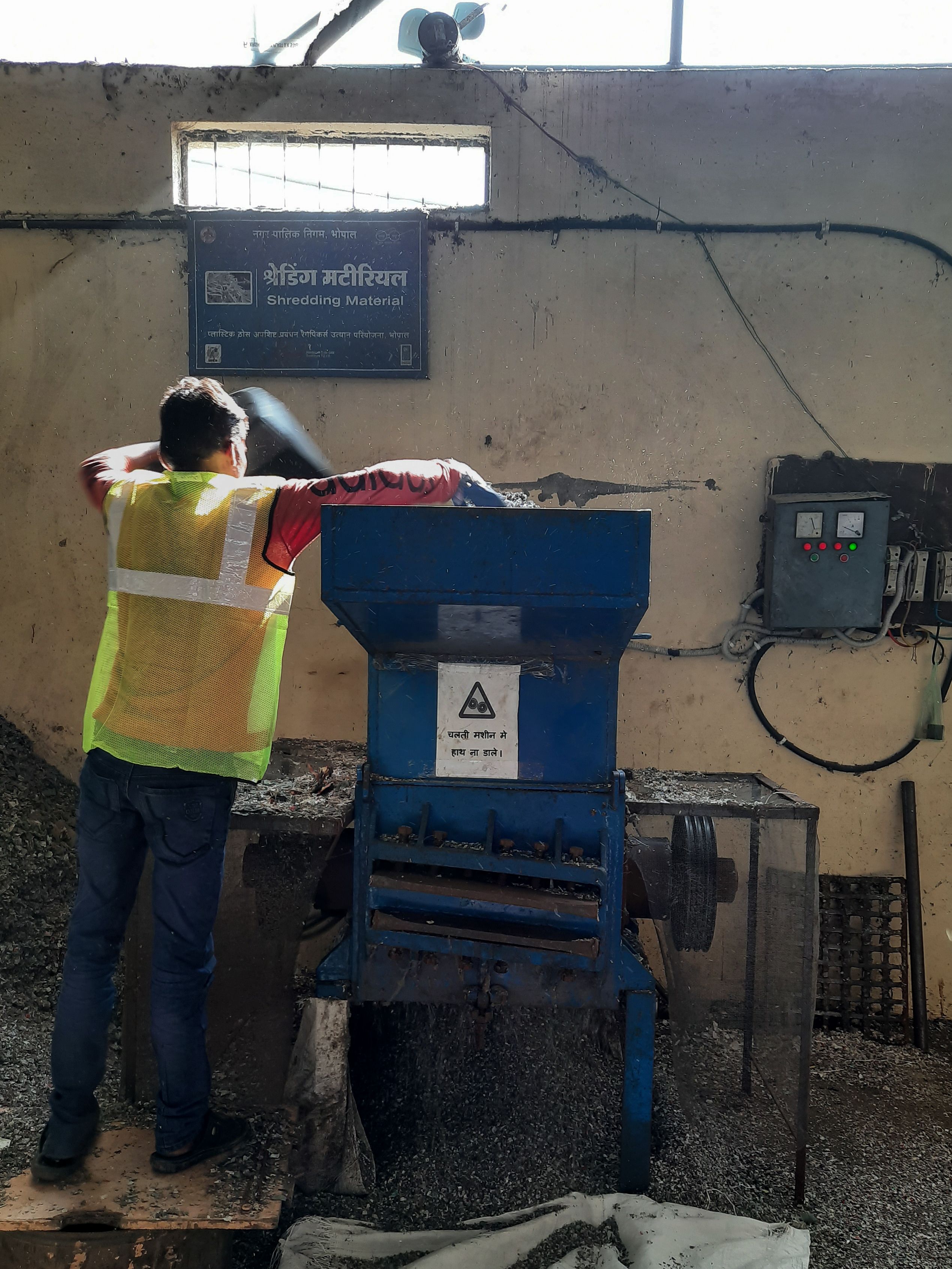 One of the most environmentally sensitive and economically useful means of repurposing plastic waste is for use in road making. The higher-grade polyethylene is baled and sent to cement plants to be used as alternate fuels. These are non-recyclable plastics and can burn with coal at temperatures >1,300° C. In collaboration with SSVAJKS, the SHGs managing the plastic recovery centres constitute small enterprises via sales of processed plastic wastes to recyclers, road construction agencies, and cement factories. Roads made with mixed plastic are highly durable due to their high resistance to water - significant for a region with an extended monsoon period.

Small Grants, Big Impacts
Since 1995 when SGP grants began in India, SGP India has supported over 350 organisations and 430 projects to protect biodiversity, address climate change and prevent land degradation benefiting over 962 women’s self-help groups and >15,000 beneficiaries across the country. By providing financial and technical support to projects that conserve the global environment while enhancing people's well-being and livelihoods, SGP demonstrates that through a mix of motivation, creativity, technology, and knowledge, we can find concrete solutions to some of our most pressing social and environmental challenges. 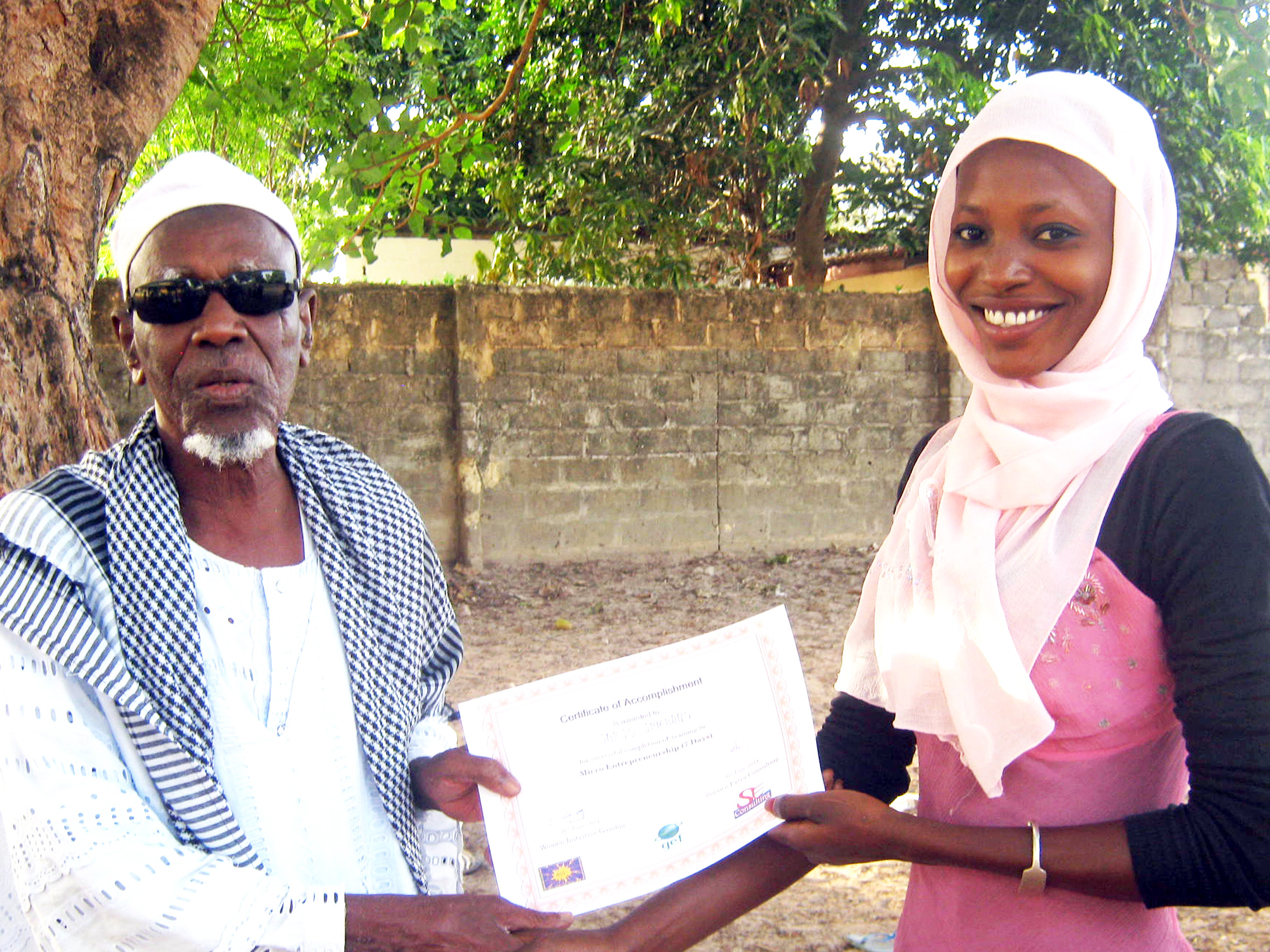 For more information on this specific project, please visit the project profile: Sustainable Management of Plastic Waste and Increased Livelihoods for Sarthak Karmis in partnership with Bhopal Municipal Corporation

For details on the overall Small Grants Programme: https://sgp.undp.org